What did the third inter-Korean summit have to do with Trump?

Believe me, to use one of Donald Trump’s favourite phrases, the third inter-Korean summit had almost nothing to do with the US President. Except for this: both the South Korean president and North Korean dictator were anxious to move on peace in a way Mr Trump cannot derail.

In other words, don’t mention the N-word. Just carry on peace-ifying.

That could read as “pacifying”, at least by hardliners who say North Korea should de-nuclearise before it can be properly integrated into the world community. To which, there is this one-word answer: Israel. (And a further two names as well: India. Pakistan.) They’re all part of the nuclear club, one that they gatecrashed.

In any case, North Korea and Kim Jong Un know fully well their survival depends on possessing nukes. So long as they keep them under wraps – like Israel – they want to get on with the business of trade and economic growth.

This is proceeding apace. The third inter-Korean summit makes it more likely that Mr Trump cannot rattle his nuclear weapons again, as easily as this time last year. North Korea’s ever-closer embrace by and of the South makes an absurdity of war-talk. And China is less likely than before Mr Trump’s trade war to hit North Korea hard on sanctions.

Mr Trump had nothing to do with inter-Korean amity except as a baleful and welcome absence. 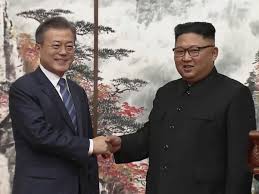