Bit by bit, the new world order is being born…today, it’s with trans-Pacific trade 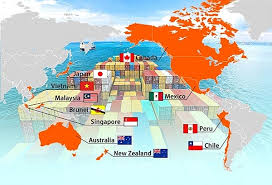 Today (December 30), the Comprehensive and Progressive Trans-Pacific Partnership (CPTPP) comes into force. This was formerly the Trans Pacific Partnership, that Asia-facing trade deal from which Donald Trump wilfully, vengefully withdrew the United States in January 2017.

That the renamed agreement comes into force two years on from America’s flouncing out is significant. It shows that no one is indispensable, not even the richest, most militarily powerful nation in the world. The world goes on, with or without America.

Of course, the CPTPP is smaller in scale and scope than a TPP would’ve been. Japan is the largest economy in the CPTPP; the US was the largest in the proposed TPP. The 11 CPTPP members — Australia, Brunei, Canada, Chile, Japan, Malaysia, Mexico, New Zealand, Peru, Singapore, Vietnam – represent roughly 16 per cent of global economic output and 500 million people. The original deal was obviously a great deal larger because the US share of global GDP is 15 per cent.

Even so, the CPTPP is an aspirational agreement. Though Brunei, Chile, Peru, Vietnam, and Malaysia have not yet ratified the agreement, there is every indication they will and that Japan’s desire for other countries to join will also come true.

In the meantime, tariff barriers will start falling across the Pacific Rim and American products such as Welch’s grape juice, Tyson’s pork and California almonds will suffer in comparison with competitors’ products from countries participating in the new CPTPP.