Just days ago (Thursday, January 17), Australia’s Prime Minister Scott Morrison said that Canberra would expand a regional labour scheme that would allow Fijians and others in the neighbourhood (Kiribati, Nauru, Samoa, Solomon Islands, Tuvalu and Vanuatu) to work in Australia for up to three years.

Significantly, Mr Morrison was speaking in Suva, the Fijian capital.

The day before that Mr Morrison was in Vanuatu. There, he assured everyone Australia would once again allow generous imports of kava, an intoxicating drink that is the Pacific’s favorite tipple but restricted in Australia since 2007.

Christmas is over but Australia seems in the mood to play Santa.

It’s clear that Canberra is trying to take charge of its own region and fend off China’s growing influence. In just a decade, China has lent more than $1.3 bn to the Pacific islands, making it the region’s largest bilateral lender. Though Australia also offers cheap loans and infrastructure grants, it can do (and is doing) one better. It is trying to build on cultural ties and it’s significant Mr Morrison dedicated his first working week of the new year to the task.

The January initiative builds on the pivot towards the Pacific announced by Mr Morrison in November. It is likely to pay off after years of Australian inertia. The goodies being handed out by Australia includes a regional infrastructure bank, a permanent defence-training force and five new island embassies.

Watch the Chinese try to spend their way out of that. 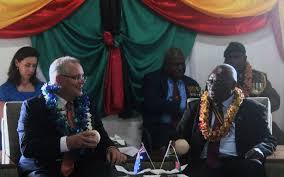