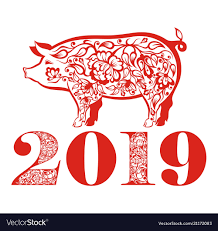 The novel makes mention of “salty mince pork” and the main protagonist – Lily Chen’s – dismay that her little son’s Christmas break won’t cover Chinese New Year. Accordingly, the Chen family decides – as do many immigrants in a strange land – to bring Chinese New Year celebrations forward. They celebrate when little Man Kee is off school, ie during the Christmas break.

“Salty mince pork” and the difficulties posed when celebrating Chinese New Year were on my mind as the year of the pig begins.

It couldn’t have been a worse year to dedicate to the pig. China is in the grip of an African Swine Fever epidemic, which could ruin millions of pig farmers. As of January 25, the UN had confirmed 104 outbreaks of ASF in China and the culling of 916,000 pigs. The disease cannot be contained – by vaccination. Russia, which has suffered for more than a decade, has suffered the consequences.

No harbinger for many happy new years for China.