Israel’s election campaign came to Washington on Monday, March 25 and how.

Both frontrunners for the April 9 poll – incumbent Prime Minister Benjamin Netanyahu and challenger Benny Gantz – made high-profile appearances in the American capital.

Mr Netanyahu met his buddy and benefactor Donald Trump at the White House. Mr Gantz showed up at the pro-Israel AIPAC conference, where he emphasised his military credentials, called for “unity” and condemned corruption and racism (especially of the Netanyahu variety)! At another event, Mr Gantz criticized Mr Netanyahu for the deteriorating security situation.

Meanwhile, some 6,000 miles away, the action was heating up and Mr Gantz’s words seemed one hundred per cent true. Israel’s military struck back with force after a rocket fired from Gaza struck a family home north of Tel Aviv. The Israeli action was, according to its acting foreign minister, the largest operation undertaken in Gaza since 2014. There was a moment that  Monday, events seemed to be spiralling into war, with Hamas firing rockets in response. But then the Islamist group announced a ceasefire.

What’s happening with Israel and the US is clear. Both incumbent leaders seek political advantage and see it in helping each other. Mr Netanyahu is happy to be a ‘Jewish Trump’ – castigating “fake news”, “witch hunts”, and pursuing a conscience and ethics-free politics. Additionally, he is exuberant that Israel is receiving favour after favour from the Trump administration. Just days ago, Mr Trump officially (and unilaterally) recognized Israeli sovereignty over the occupied Golan Heights.

Mr Netanyahu has not been slow to draw attention to the unique favours being heaped on Israel while he is in charge. There are election billboards across Israeli cities, showing Mr Netanyahu with Mr Trump and proclaiming that Israel’s leader is in “another league”.

Meanwhile, Mr Trump sees political advantage in being the president who moved the US embassy to Jerusalem, defended Israel at the UN and constantly privileges the country over others in the Middle East. He wants to keep American evangelical support and is angling for the American Jewish vote too (though that has been solidly Democrat.)

US political considerations are affecting Israel’s 2019 elections. As for the effect of Israeli actions on the US 2020 election? The next blog will look at exactly that. Come back tomorrow. 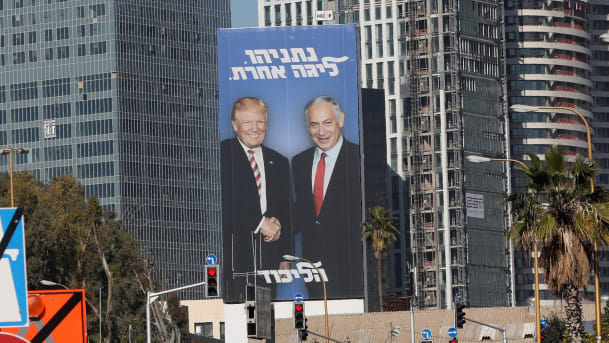