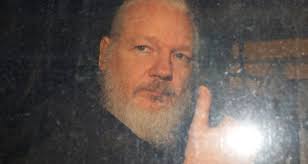 WikiLeaks’ co-founder Julian Assange decisively returned to the world news agenda on April 11 with his bodily removal, kicking and screaming, from self-imposed incarceration in the Ecuadorean embassy in London.

The governments and legal systems of four countries — Britain, Ecuador, the United States and Sweden — are involved in the Assange saga. Britain for arresting a man variously regarded as a truth-teller or anarchist menace. Ecuador, for withdrawing political asylum granted to Assange and, more recently, citizenship.

The US has indicted Assange on one count of “conspiracy to commit computer intrusion” of a classified government machine. It resulted in the biggest breach of classified data ever. And in Sweden, Assange faces allegations of sexual assault and rape of two women. Even though the investigation was dropped in 2017, Sweden’s chief prosecutor Ingrid Isgren has said it could be reopened if Assange is returned to her country before August 2020.

Add to that the heated debate almost immediately triggered after Assange’s arrest over alleged attempts by the UK and the U.S. to censor “journalism”, and it’s clear the Assange story will stay in the headlines. Former Guardian writer Glenn Greenwald, who wrote up the disclosures of whistle-blower and former CIA contractor Edward Snowden, tweeted that the US indictment of Assange was “the criminalization of journalism”.

It was a grave charge against a country that rejoices in its First Amendment constitutional commitment to free speech. But it’s complicated somewhat by other opinions, not least from Susan Hennessey, Executive Editor of the authoritative Washington, D.C. Lawfare blog and Brookings Fellow in National Security Law. Hennessey noted “the Assange charges are all good, old-fashioned Computer Fraud and Abuse Act charges. Not much in here that should give journalists anxiety.”

On the facts, Hennessey is right. The US government hasn’t really charged Assange with publishing stolen material — just with helping to steal it, which means he was not a passive recipient but an active collaborator. This seems to make him less a “journalist” or “editor-in-chief”, as Assange once styled himself, than a hacker. On optics though, Greenwald may be more persuasive. Assange, whose WikiLeaks revealed the murderous casualness with which American aircraft killed Iraqi civilians on the unproven suspicion they were terrorists, could be said to have performed an essential public service.

In the first three years after WikiLeaks’ 2006 launch, it published leaked material that demonstrably served the common weal. The documentation covered, for instance, corruption in Kenya and a Peruvian oil scandal. But later, WikiLeaks published a full archive of unredacted US diplomatic cables for no discernible public service purpose and the move was widely condemned. And WikiLeaks has been criticised for failing to turn its laser digital gaze on the workings of the Russian and Chinese governments.

Soon after Assange’s arrest, saltiness was added to the story when Pamela Anderson, former ‘Playboy’ model and Baywatch star, took to social media to express outrage at Ecuador, the UK, the US and Donald Trump. “I am in shock…,” Anderson tweeted. “He looks very bad. How could you Equador [sic]? (Because he exposed you). How could you UK? Of course — you are America’s bitch and you need a diversion from your idiotic Brexit bullshit.” Anderson, who occasionally delivered vegan meals to Assange at the Ecuadorean embassy, has previously made coy suggestions about their shared “romantic struggle”. Meanwhile, British fashion designer Vivienne Westwood, who created a special T-shirt last year in support of Assange, said his arrest was “about human rights, free speech and misrule of law by government”. And in Washington on April 11, Trump disclaimed all knowledge of the organisation Assange founded, despite at least a hundred examples from the 2016 presidential campaign during which Candidate Trump either praised or mentioned WikiLeaks.

So, what makes Julian Assange important enough to feature in comments by an American president, a one-time sex symbol, prominent journalists, lawyers, anyone who matters really? Does Assange matter, and if so, why?

The first thing to say about Assange is this: he has built up a global celebrity following in his years in the Ecuadorean embassy in London. Supporters include American philosopher and activist Noam Chomsky, Oscar-winning documentary film-maker Michael Moore, Nobel Peace Prize-winner Adolfo Perez Esquivel, Hollywood actor John Cusack, musician Brian Eno and Greece’s former finance minister Yanis Varoufakis. Second, he is often ranked alongside Snowden, to whom Assange once compared himself. Third, for years, Assange could be said to have served as a propaganda tool for Ecuador, a relatively little-known South American country, governed until 2017 by virulently anti-American president Rafael Correa.

The celebrity support is of no particular account. Famous people gravitate towards other famous people. As for Assange being in Snowden’s league, there is not much comparison between the men. Snowden blew the whistle on the US government’s warrantless mass surveillance programme at home and abroad. He was brave and paid the price. Assange, some would argue, is no hero, and certainly not one like Snowden. Before the 2017 pardon by President Barack Obama of Chelsea Manning, Assange’s alleged co-conspirator on the US charge of “computer intrusion”, he had said he would be willing to stand trial in the US if the former US intelligence analyst was freed. But after Manning’s pardon, Assange showed no sign of wanting to follow through on his promise even though Manning had already faced the consequences of her actions.

Finally, there is Ecuador’s extraordinarily high profile as the result of the Assange case. When it granted Assange asylum, Ecuador’s president was one of a clutch of anti-American South American leaders such as Venezuela’s Nicolas Maduro and Bolivia’s Evo Morales. Ecuador’s then president Rafael Correa delighted in showing the American hegemon the limits of its power, flouting US sanctions on Iran and accepting Chinese investment. But in 2017, Correa’s deputy, Lenin Moreno, became president of Ecuador and set a more moderate course, as well initiating attempts to re-build the relationship with the US. The result was a visit last year to Ecuador by US vice-president Mike Pence. And then the withdrawal of asylum from Julian Assange.

Clearly, Assange’s Ecuadorian saga ends as it began — with politics predominant. It is a poor epitaph for a man who styled himself as a web-warrior for truth sans all considerations of politics or profit.

(The author is an international affairs columnist based in London. Her twitter handle is @rashmeerl. Views are personal)