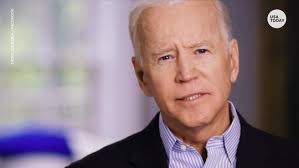 There are three things to say about Joe Biden’s candidacy.

All three are possible to address if one looks at the essential logic of Mr Biden’s candidature in 2020.

So what is this Biden run?

It’s a third-time-lucky punt. It’s a Hillary Clintonesque “I-want-to-be-president” candidacy. It’s a policy-lite campaign. And that’s ok if one reads the answer to Question 2.

Because Mr Biden’s sole purpose now should be to serve as target practice for Donald Trump. He shouldn’t worry about winning.

At 76 (he would be 78 when he enters the White House, if elected), and with nearly half-a-century of public service behind him, Mr Biden’s role in the 2020 campaign should be to scrap with Mr Trump. That way, the younger Democrats with a heavy policy agenda and with lots to say, can get on with the national conversation.

Finally, we come to the wherefore.

Mr Biden has name-recognition and was polling at roughly around 30 per cent even before he jumped into the race. That’s good but not great. The man has been vice-president for eight years. Why would people not know him? But, it’s also reasonable to expect that as the campaign continues and some of the other candidates start to become more familiar, Mr Biden’s numbers will start to slip. As someone who’s not expected to offer a policy–heavy agenda, Mr Biden may also have less to say than the others. Platitudes don’t substitute for passion. Remember Mrs Clinton.

Chances are Mr Biden won’t win the Democratic nomination. And if he did, he won’t win against Mr Trump.

But he does serve a purpose at this point of time.