US 2020: The most battleground state of them all 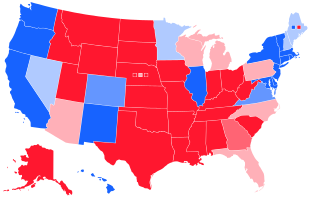 America’s most battleground state in the next election has to be Wisconsin in the mid-west.

It’s less Republican than swing states such as Florida, Ohio, North Carolina and Iowa. It went for Donald Trump in 2016 but was leaning Democratic in the two years leading up the November 2018 mid-terms. But then in the first week of April, Wisconsin went ahead and did something extraordinary. It elected conservative judge Brian Hagedorn, who had worked for former Governor Scott Walker.

Though the defeat for liberal candidate Lisa Neubauer had a fairly narrow margin — 0.5 percentage points, or about 6,000 votes — it was a sign that Republican voters were keen to make their voice heard.

Judge Hagedorn’s victory was about bigger issues than just a Republican win.

First, it meant conservatives would have a five-to-two majority on the Wisconsin Supreme Court. This in turn meant that conservatives (even if they lost one judicial seat next year) would still have a majority for the redistricting process after the 2020 census. Redistricting is when boundaries are drawn for congressional and state-legislature districts and the conservative judge’s victory ensures the highest court in Wisconsin will not do much about extreme gerrymandering as perpetrated by the Republicans for years.

The second implication of Judge Hagedorn’s win is that Wisconsin may feel more warmly towards Mr Trump’s Republican Party than the past two years indicated.

Commenting on the “left’s unexpected defeat”, the Wall Street Journal mused “Perhaps the emerging radicalism on the left is causing voters to think twice about returning them to power.”

Of course, all is not yet lost. Wisconsin too may not yet be lost to the Democrats. Mr Trump has a low approval rating and the Democrats did rather well in the midterms.

But Wisconsin really is a battleground.