Who needs factories? Good question to ask America but not countries like India 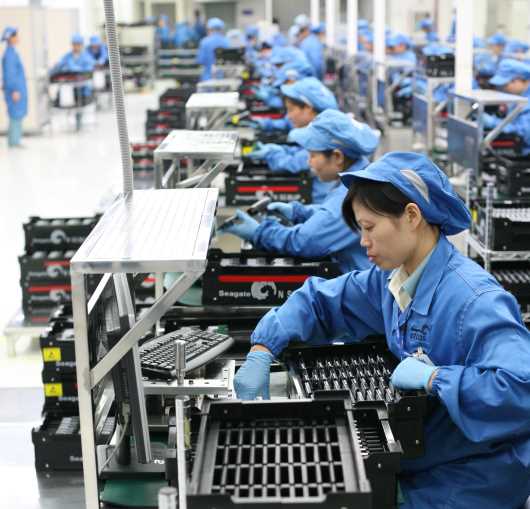 When manufacturing activity in the US and China, the world’s two largest economies, perks up, everyone heaves a sign of relief. Manufacturing, according to most knowledgeable people, is the key to a strong economy.

Now here’s the other point of view.

It was a good question. The focus – by politicians in disparate parts of the world, not least Donald Trump in America – on manufacturing jobs may be misplaced.

Value-added technological production is the way to go. The promise to bring low-wage jobs back to America doesn’t mean very much at all.

Mr Schuman’s article pointed to a study conducted by the Asian Development Bank Institute. It found that the US economy was not losing much because Apple’s iPhones are manufactured in China. The process of assembling an iPhone – done by Chinese workers in factories in China – apparently accounts for just 3.6 percent of the production cost. It is the companies that developed the signature technologies and provide the components that earn the most.

Those are the sort of jobs America – a rich and developed country – should aspire to. Technology developers, entrepreneurs, high-tech knowledge-workers.

It’s exactly what Republican Congressman Todd Rokita from Indiana’s 4th District said many many months ago (during the 2016 US election campaign, in fact). During the primary challenge posed to Mr Rokita by Trump-supporting Kevin Grant, the latter banged the drum of a jobs-bleed from America in general and from Indiana in particular. But Mr Rokita argued that Indiana did not need jobs that called for “shooting screws”. Instead, he said, it needs knowledge economy work and must prepare its people to be able to staff it up. Interestingly, Mr Rokita won that argument (and the election). He defeated his Democratic opponent John Dale and was elected to serve a third term.

But what works for America doesn’t for India, which is populous and poor. The Bloomberg View piece argued that India’s prime minister Narendra Modi’s ‘Make in India’ campaign was also part of the misplaced faith in factories.

I disagree. India needs all the jobs it can get – and jobs of every sort.

It can’t afford to be picky.

Whatever the future brings – automation, advances in robotics and artificial intelligence – there will probably never be a time when the human-staffed factory is obsolete.