Regional tourism must move on from the Thomas Cook package

Tour companies such as Thomas Cook were part of that effort to create an easily digestible narrative about foreign locales for Western consumption. 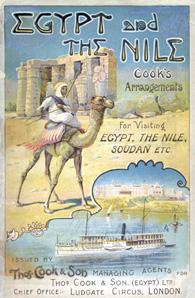 The death rattle of Thomas Cook has been ­­heard over many years in the firm’s increasingly feeble announcements of losses and insurmountable debt but, now that the venerable British company has given up the ghost, it is time to appraise the tourism model it built and what it has meant for the Middle East and North Africa region.

The truth is, Thomas Cook flourished because it was creative enough to package the Middle East — its places and people — as a stereotype. Thomas Cook was one of several mid-19th-century initiatives to help Western travellers navigate the region – but only the geographic distance, not the deeper complex layers of culture.

In his book “Colonising Egypt”, Columbia University political theorist Timothy Mitchell argues that many European and North American travellers in the 19th century sought to tour Egypt as if it were an exhibition like those they might have visited at the London, Paris or Chicago world’s fairs. There, too, scenes of “the East” were on offer. Forging a tourism economy in the Middle East meant creating the same sort of accessible packages of reliable exotica. Mitchell calls it “the world as exhibition.”

Tour companies such as Thomas Cook were part of that effort to create an easily digestible narrative about foreign locales for Western consumption. Incidentally, the first Baedeker guide, once considered indispensable for Western travellers, appeared around the same time as Thomas Cook’s tours. Baedeker typically offered advice along the following lines: Tangier market in Morocco is “an indescribable mass of Oriental humanity”; and the average Egyptian is “no more intelligent than a child.”

Historian F. Robert Hunter said “tourism was inseparable from the West’s conquest of the Middle East. Beginning in the 19th century, the Middle East was subjected to European economic penetration and political control… Empire provided Cook & Son with new fields to conquer, not only in Egypt, but also in India and beyond.”

Thomas Cook dominated tourism for 178 years. In fact, it created modern travel as we know it today, pioneering discounts, hotel vouchers, food coupons and tour operators. Established by a cabinet maker and Baptist minister in 1841 with domestic excursions in Britain, it was only when Cook & Son expanded to the Middle East that the business really took off.

After a Thomas Cook-organised exploratory tour to the Middle East — Turkey, Egypt and Palestine/Syria — in 1868, the company grew rapidly as a result of its connection to Britain, then the world’s leading power. Cook & Son received special treatment from the Egyptian viceroy, opened its first Middle East office in Cairo in 1872, acquired hotels in Egypt and heavily marketed the country as a winter resort. Eventually, it opened tourism all along the Nile river and assumed a monopoly of Nile steamboat traffic.

Thomas Cook tours became so famous they were written about by Charles Dickens and Anthony Trollope. Thomas Cook, the man, became a celebrity, attending the 1869 opening of the Suez Canal alongside Empress Eugenie of France.

From 1869-1882, the year of Britain’s “temporary” military occupation of Egypt, Cook & Son claimed to be engaged in the “business of peace”. In a distant echo of the political pressures faced today by Hong Kong flag carrier Cathay Pacific to take sides during months of pro-democracy protests, Cook & Son remained aloof during the local rebellion against Egypt’s viceroy and his government. Hunter says that “by the turn of the century, there were two empires on the Nile — Britain’s military occupation and Cook’s Egyptian travel”.

Despite 20th-century decolonisation and enormous geopolitical change in the 21st century, Middle Eastern tourism continues to be bound up in the model pioneered by Cook. This revolves around moving large numbers of Westerners through places they will barely remember in a week or two, having forged no real human connections in the process. Now that Thomas Cook is no more, the tourism prospects of Turkey, Tunisia and Egypt appear to have dimmed.

However, this low point could be a launchpad for rethinking regional tourism. The 21st century is very different from the world in which Thomas Cook began his business. It is beset by worries about climate change and mass tourism’s carbon footprint in terms of flights and hotels. With migrants and foreigners increasingly demonised, it is increasingly important to forge human connections.

There is an opportunity now to develop a richer visitor experience, which focuses on the region’s many-layered cultural, historical and traditional resources. Instead of the resorts, which Thomas Cook pioneered, how about home stays, tents, small pensions and a scaled-down, more organic form of hospitality? It would be more green and socially responsible, and it will be in demand as the world increasingly seeks authentic experiences. It would also allow for interaction with local host communities, taking East-West contact to a deeper level.

It’s time to move on from the Thomas Cook package.