Saturday rearview: How the world made it harder to be good in 2019

The week was rich in sights, sounds – and tastes – of Israel and the Palestinian Territories. And then there was a piece I wrote with Jason Karaian  in Quartz about how the world in 2019 made it harder to be a good person. Think about it: you can’t fly, buy fast fashion, anything plastic, take a holiday to a popular place, eat a burger made of real meat, subscribe to Prime, and suchlike.  Click here to read the piece. As we say at the outset:

“There is a moment in season three of the American comedy television series The Good Place in which Michael, the lead protagonist, has an epiphany about the problem with modern life. “Every day,” he says, “the world gets a little more complicated, and being a good person gets a little harder. Some say the sitcom, which is set in the afterlife and grapples with who deserves to go to heaven or hell, is “the ultimate TV show for our times.”

The rest of my writing week was pretty much taken up with the Holy Land. My favourite memory of that is Mohammed standing with his hill of  zataar, sumac and sesame, which is meant to depict the elevation to Haram Sharif or Temple Mount. (Notice the replica atop.) I took the photo in his shop on Khan az-zait in the Old City.

Then there was  Bethlehem’s apparent fascination with Starbucks. Right near the Church of the Nativity, there’s a Squarebucks and further along, a Stars and Bucks.

I wrote about the Abrahamic Reunion’s peace initiatives in Israel and the Palestinian Territories. On Quartz, it was about Jingle Bells in Arabic and Santa serving up baklava in the Palestinian city of Bethlehem.

Here’s the high point of that gathering:

“The idea of bringing together Jews, Muslims, Christians, and Druze in the Holy Land to meet, eat, and talk is similar to initiatives in Northern Ireland, where decades of political conflict led Catholics and Protestants to lead separate lives.”

And my weekly column for The National also discussed “the whole idea of bringing together Jews, Muslims, Christians and Druze to know ‘the other’ and work at the long-running conflict in that spirit of engagement.”

In Nazareth, as I wrote, “at least a couple of hundred people gathered to discuss what they did not know about other faith communities, to break bread together and then travel up to Mount Precipice – the hill known to Christians from the Bible – to release hundreds of balloons for peace.”

That said, it also seemed right to note the difficulties of practical application of communal fellow feeling. “The gaps between the two sides of the Palestinian-Israeli conflict ‘have never been wider’, as veteran US presidential adviser and peace envoy Dennis Ross recently said. Mr Ross, who worked on Bill Clinton’s Camp David summit of 2000 involving then Israeli prime minister Ehud Barak and then Palestinian Authority chairman Yasser Arafat, now discerns a ‘sense of hopelessness that pervades Israeli and Palestinian attitudes about the prospects of peace’. It has marked, he said, by “deep disbelief on both sides” with both the Israeli and Palestinian people having lost faith in the prospects of a resolution. This has resulted in greater entrenchment of political positions on both sides.”

Think independently, do what you can, be who you are. 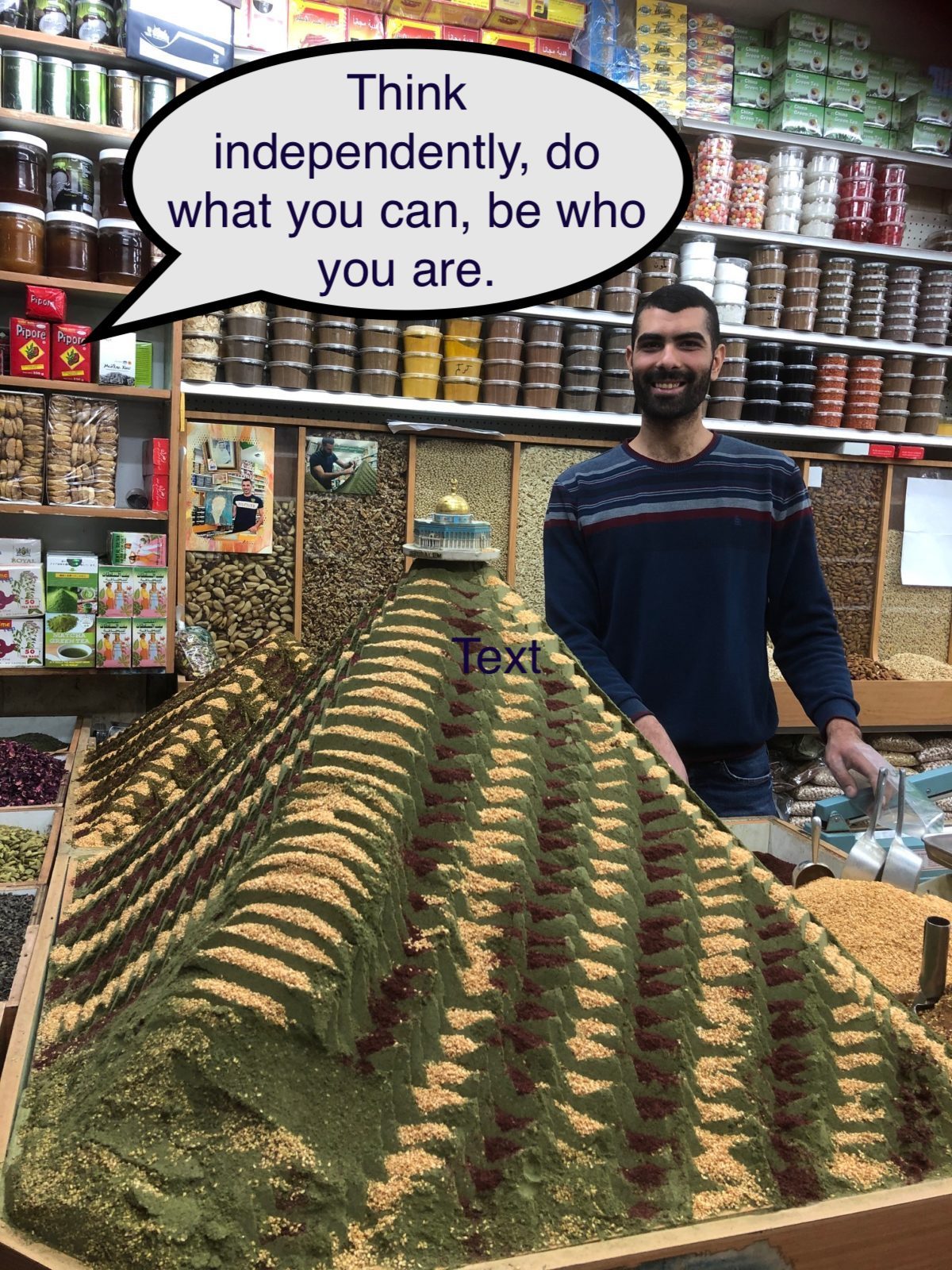