An Open Letter to the West: About toilet paper and other matters

Dear Brothers and Sisters Born in the West

In these extraordinary and difficult times, do you know what’s reassuringly familiar? Your panic about toilet paper.

The last one that made headlines (and for much scratching of heads) was the American TP panic of 1973.

Now that was the year of the oil shock and a massive stock market crash, but it was the toilet paper scare that really took everyone by surprise. That one involved a Republican Congressman from Wisconsin, Harold V. Froelich, the late Johnny Carson, who was famous for The Tonight Show and other movers and shakers, but especially the panicky TP-buying great American public.

For four months, TP was bartered, traded and hoarded in America. Presumably, it was rationed too, with worried American mothers handing out six sheets at a time! Eventually, things started to return to normal in February 1974.

But it’s Hawaii that seems to know the most about TP panic. As we’ve been hearing in the age of the coronavirus, from old-timers in the Pacific island state, Hawaii’s insecurity about supplies manifest in TP panic during the dock strikes of the 1940s and 1970s. Bob Sigall, a columist for Hawaiian paper Star-Advertiser,  recently noted that panic reached such a height a radio station held a “roll-a-thon” contest in 1971. “Every time that they played the song ‘Roll On’ by the New Colony Six, the first caller to get through on the contest telephone line would win a roll of toilet paper”. The station then dispatched a Rolls-Royce bearing an entertainer named John Rowles, to deliver rolls of TP to the lucky listener. As Mr Sigall writes: “Rowles delivers rolls in his Rolls. Got that?”

I think most of us will have got that. What may be a bit harder to understand is the obsession with toilet paper. Tell me, Bothers and Sisters Born in the West, do you really think toilet paper keeps one clean?

This is a delicate matter, so let me put it as tactfully as possible. As a person born and bred in India, I grew up WITHOUT toilet paper. (No, I wasn’t poor; I never missed a meal in my life, neither did any of my dozens of dogs). So we didn’t have toilet paper, but there were plastic mugs in every bathroom in my parents’ house (we had six bathrooms). From the time we were little, we were taught to ferry water from the tap to our bottoms, cleaning carefully and then washing our hands with soap. That’s how it was everywhere in India. Think of it as a manual bidet, one that costs nothing but a little effort, and is more sanitary by far.

The plastic bathroom mug was of a piece with the traditional eastern idea of bodily hygiene. From as far back as the second century BC, there are examples of the lota or bodna, a small metal or pottery vessel that was used by people in the Indian sub-continent to keep themselves clean. Muslims everywhere, by the way, don’t consider themselves clean either unless they do something called “istinja” – washing with water – after using the lavatory for any reason.

Even after I made my life in the West, dear Brothers and Sisters Born in the West, I retain a lota (see photo) that I acquired in Afghanistan. It allows for the highest standards of bodily hygiene. And it’s a useful standby for times of toilet paper panic. 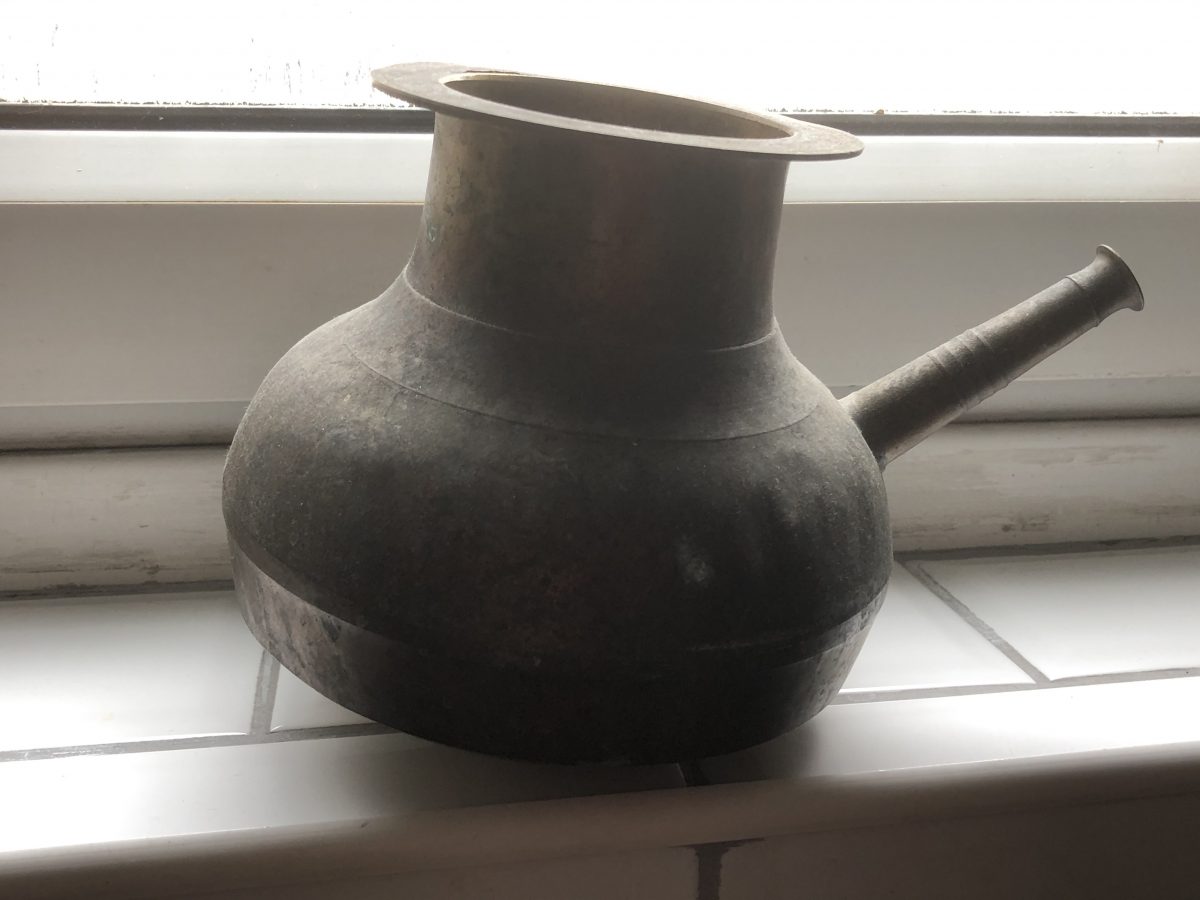