Donald Trump’s use of the White House megaphone to float the idea of injecting a disinfectant into one’s body “almost as a cleaning” has precedent – in the Middle Ages.

In mediaeval times, medicine was practised according to ideas popular since antiquity. Initially, it was thought that disease and ill-health was the result of sinful behaviour and impure thoughts, something that needed to be cleansed in order for a cure to be found.

Hildegard, the 11th century Benedictine abbess was a great mystic. But in tune with her times, she claimed that black bile and other imbalances of the humours were a sign of the Devil’s presence and that of sin.

In a hangover from pre-Christian times, the belief that elves caused disease remained fairly persistent.

Mental health issues in medieval times were also treated as a manifestation of being possessed by witches, demons and other supernatural forces, requiring the sort of interventions Mr Trump prescribed the other day – bringing light into the body “either through the skin or in some other way”.

To help the body expel evil spirits, mediaeval medical practitioners used the technique of trephining. This requiring a hole to be opened in the skull through drilling or cutting.

In the light of what’s gone before, I suppose it would be fair to say we shouldn’t be jumping down Mr Trump’s throat for prescribing a good dose of bleach-cleansing or light-treatment. He’s in good company, just in the wrong century. 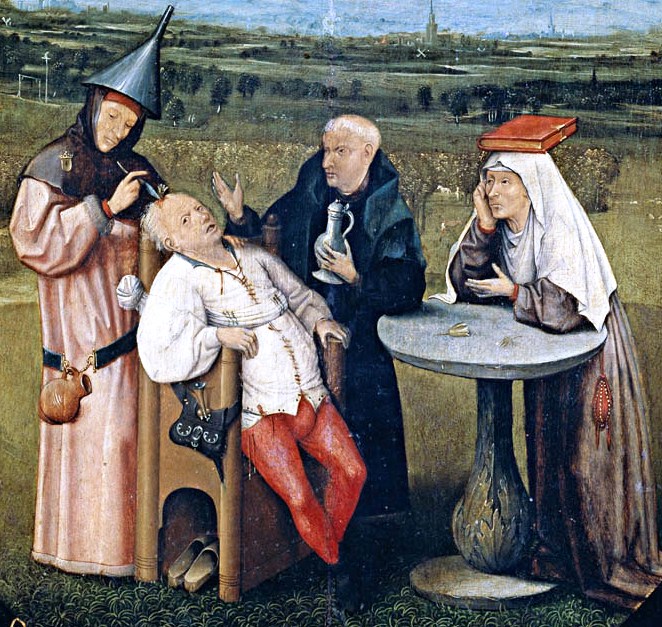