Eid under lockdown: Art for the interminable now, the pandemic era

The painting made its way around the locked-down world’s usual, no-touch channels of communication. There was Twitter, of course, but also WhatsApp, where people forwarded a picture of the painting to each other as an Eid greeting.

It seemed to capture the moment.

Of nearly two billion Muslims in the world, it is only the cleaner at Mecca’s Grand Mosque who is now able to pray at one of Islam’s oldest and most holy sites. The coronavirus has been a great equaliser.

With the authorities having closed the Grand Mosque for prayer to prevent the spread of the virus, only the cleaner has access now. For all their wealth and power, even Saudi royals aren’t able to worship at the Grand Mosque. The same goes for everyone else from anywhere, no matter how prominent and pious. They too must keep their distance. The mosque is currently accessible only to those who clean it.

There is a starkness about Saudi artist Nabila Abuljadayel’s portrayal, a simple clarity that is curiously moving. Note the bucket and mop to one side of the worshipping figure. (As an aside, it is interesting that the painting shows a human figure, something that might not be generally expected. My PhD thesis, incidentally, investigates the proscription of mimesis and representation of sentient beings  and where that strand of thought might originate.)

The painting does have some elements of melodrama. The clouds, for instance, seem to be part of the theatrical scenery. And there is a sense of contrivance in the way the sun’s rays fall on the Kaaba and the mosque courtyard. But some might say real life has been more sensational of late than any attempt at creative portrayal of its nuances.

The painting belongs in the world’s most memorable lockdown chronicles whenever they are compiled. 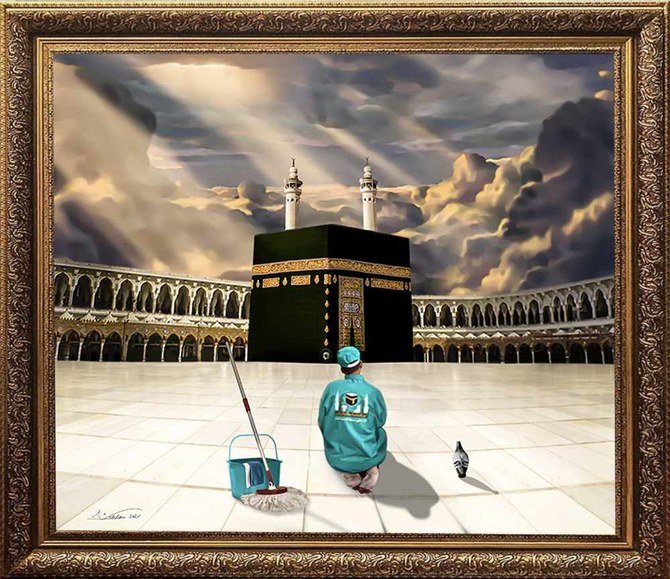