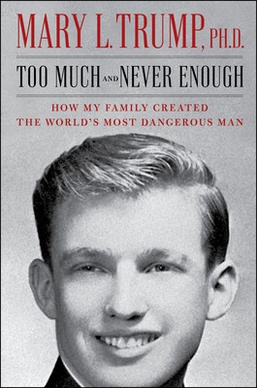 By this time next week, we’ll still be talking about the Mary Trump book. It’s another matter if the tittle-tattle will amount to much more than we already know about the author’s uncle, Donald Trump.

Every newspaper pre-publication review of Too Much and Never Enough: How My Family Created the World’s Most Dangerous Man, describes the US president as a narcissist, a fraud and a bully.

What President Trump’s niece does provide is the insider information of a family member and the stories — some embarrassing, some desperately sad — that make up the core of a family’s shared experience.

So, for instance, there is Mary Trump’s claim that her uncle hired “a smart kid with a reputation for being a good test taker, to take his SATs for him”. The exam determines university placement. The White House denies the president cheated in this way.

There is also the claim that her uncle hired Mary to ghost write a book about him. It was to be called the Art of the Comeback and Donald Trump provided his niece with little more than “an aggrieved compendium of women he had expected to date but who, having refused him, were suddenly the worst, ugliest and fattest slobs he’d ever met”.

Again, there is an allegation from Mary Trump that her uncle made a lewd comment about her body when she was 29 years old.

Finally, of course, there is the truly terrible recounting of the iron control exerted by Donald Trump’s father, the cold and chauvinistic Fred, on the entire family and the clan’s consequent dysfunctionality. Mary Trump’s father suffered great humiliation at the hands of both his father and brother Donald, she says.

In her telling, cruelty, shallowness, mendacity and avarice were the natural order of things if you were a Trump.

The book has enormous value — as a source of gossip about the US president.

But one has to wonder if it can really be seen as the objective observations of a clinical psychologist. The book’s cover stresses the author’s degree and training, with “PhD” in large letters after Mary Trump’s name. Every media outlet in the world is focussing on her doctorate in clinical psychology and quoting her assessment of Donald Trump’s character as if it were a medical diagnosis.

For instance, she writes: “This is far beyond garden-variety narcissism. Donald is not simply weak, his ego is a fragile thing that must be bolstered every moment because he knows deep down that he is nothing of what he claims to be.”

All of that may be true and few would challenge it anyway because of Donald Trump’s words and deeds in the past five years on the world stage.

Even so, this scathing memoir does call the author’s motives into question. Did she diss Donald Trump and the other members of her estranged family to get revenge? For money? For Fame?

If it were altruism — an attempt to properly inform Americans ahead of the 3 November presidential election — a further question arises.

At the risk of being pernickety, shouldn’t Mary Trump have issued her stark warning before election day 2016?