The account of Garden Marcus had echoes of Chance, the hero of Jerzy Kosinski’s satire ‘Being There’

Reading a rather breathless account about Marcus Bridgewater (Garden Marcus on TikTok) and his philosophy of gardening, self-care and life, made me think of Chance, the main protagonist in Jerzy Kosinski’s 1970 novel ‘Being There’.

Mr Bridgewater, 33, lives in Texas, loves to garden and has 653,000 TikTok followers.  The New York Times describes him as “one of several Black gardeners and farmers who have cultivated online followings in recent years.” 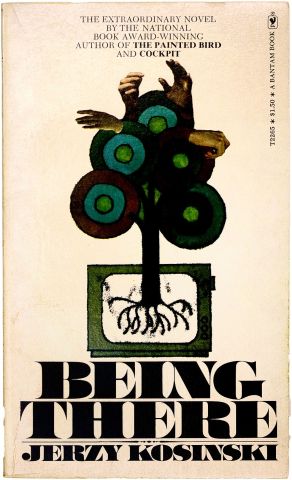 ‘Being There’ is a slim book, a brilliant satire about Chance, a simple-minded boy who tends the garden in a rich man’s house. Chance, who has no surname and no official history, is a gentle, helpless character. His only education is the television set and his only knowledge of the world is that which he sees on TV – as well as in the garden. Chance eventually goes on to become Chauncey Gardiner, a greatly sought-after political pundit, the guest of prominent politicians and including the president of the United States, and a man whose every statement is considered penetrating and wise. He is quoted by journalists, hailed by diplomats and becomes a legendary commentator on the affairs of the world.

The 1979 film adaptation, starring Peter Sellers and Shirley MacLaine, did rather well in terms of awards and awards nominations. Some years ago, the Library of Congress selected the film version of Kosinski’s book for preservation in the US National Film Registry on the basis that it was “culturally, historically, or aesthetically significant.”

So back to Mr Bridgewater, Garden Marcus. What’s the connection with Chance? Mr Bridgewater cannot be described as anything like Chance, who was distinguished by his singular lack of education and his simple-minded view of the world.

And Mr Bridgewater, unlike Chance, is certainly not receiving great political attention. Why, at the end of the novel, Chance is being considered as a candidate for the vice-presidency, just a heartbeat away from the Oval Office.

But there is a thread that joins the fictional Chance and Garden Marcus: the open-mouthed wonder with which Mr Bridgewater’s pronouncements are being received. He is being seen as an acute diagnostician of the human condition just as much as that of plants. I don’t think that’s Mr Bridgewater’s fault so much as that of his interlocutors. Thus it was with the fictional Chauncey Gardiner too.

Consider Mr Bridgewater’s advice on plant care, all solid stuff, but hardly a great revelation in philosophical terms. But they might be divine revelation the way they’re reported – and linked to the dilemmas of life:

** “I believe it (gardening) relates in a way of helping someone slow down to appreciate nuances that our world today does not necessarily encourage.”

** “It can be difficult to re-root, establish new relationships, grow beyond the old form, but it can also be what’s needed to create new and healthier roots in our future.”

** “I think we are experiencing high waves of anxiety and bombardment of information regularly. But for me, slowing down and thinking about what to do next comes seamlessly through the garden.”

** “Our bodies are batteries, and we need to energize them (by making contact with bare earth).”

** “In a pot with 10 different plants, to just look at one plant is to sacrifice probably three others. If I start coddling any one of my plants, I’m likely to fail many.”

** “In these recent times, many of us who’ve had thorns in our side for our entire lifetime are having to go back through a process of addressing them. And because I have a ton of thorns all over, I am conscious of how wounded so many other people out there are.”

Now consider Chance’s pronouncements in the novel, which are alternately hailed as deep, true and a roadmap for the future:

** “It is not easy, sir, to obtain a suitable place, a garden, in which one can work without interference and grow with the seasons. There can’t be too many opportunities left any more. On TV…I’ve never seen a garden. I’ve seen forests and jungles and sometimes a tree or two. But a garden in which I can work and watch the things I’ve planted in it grow . . .”

** “The garden I left was such a place, and I know I won’t ever find anything as wonderful. Everything which grew there was of my own doing: I planted seeds, I watered them, I watched them grow. But now it’s all gone, and all that’s left is the room upstairs.”

** “In a garden, growth has its season. There are spring and summer, but there are also fall and winter. And then spring and summer again. As long as the roots are not severed, all is well and all will be well.”

** “I know the garden very well. I have worked in it all of my life. It’s a good garden and a healthy one; its trees are healthy and so are its shrubs and flowers, as long as they are trimmed and watered in the right seasons. The garden needs a lot of care. I do agree with the (US) President: everything in it will grow strong in due course. And there is still plenty of room in it for new trees and new flowers of all kinds.”

** “In a garden, things grow…but first, they must wither; trees have to lose their leaves in order to put forth new leaves, and to grow thicker and stronger and taller. Some trees die, but fresh saplings replace them. Gardens need a lot of care. But if you love your garden, you don’t mind working in it, and waiting. Then in the proper season you will surely see it flourish.”

Truly, we have a propensity to hear whatever we want despite what has been said.