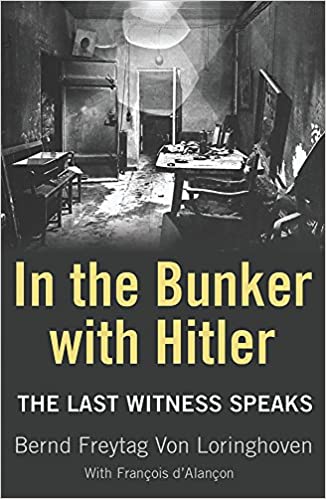 This week I’ve been reading a book I picked off my shelves at random. It’s titled ‘In the Bunker with Hitler: The Last Witness Speaks’. On the author page (before the half-title page) is a bold inscription in the green ink I favoured at the time: 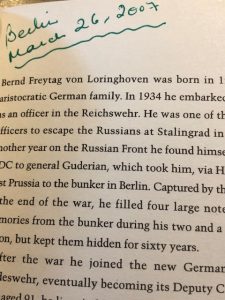 What it doesn’t say is where in Berlin I bought it. Right near Checkpoint Charlie,  the third checkpoint opened by the Allies in and around Berlin and the most famous crossing point between East and West Germany.

Checkpoint Charlie was the setting for many Cold War-era thrillers and spy novels, but after the fall of the Berlin Wall, it’s been a tourist attraction more than anything else. The area is chock full of shops and cafes and it was in one of the larger bookstores that I bought Bernd Freytag Von Loringhoven’s book for 13.90 euros. The author had died the month before I bought his book.

Fast forward to mid-November 2020. ‘In the Bunker with Hitler’ has turned out to be an excellent book choice at this point in time. Von Loringhoven describes the closing months of Hitler’s war and the insanity, irrationality, cruelty and hubris of the Fuhrer.

It’s riveting to read (on page 70) about the Fuhrerlage or situation meeting, “the central event in Hitler’s daily life”. As the war dragged on, the meetings started to be held later and later in the evening, sometimes lasting five or six hours at a time. The length of each meeting, topics discussed and everything else “all depended on the Fuhrer’s whim and point of view”.

Von Loringhoven offers a detailed account of how Hitler exercised power, abandoning “the vital area of politics so as to devote himself to matters of military command.” (The absurdity of this is unmistakable considering Hitler was never more than a lowly army corporal!)

He “personally issued orders for troop deployments, offensives and movements of battalions and companies. Such orders would be communicated immediately to the command posts charged with carrying them out. It was a method that aroused much discontent from top to bottom, among commanders and troops alike. On land, German soldiers paid the price with their lives.”

He always needed an audience to stimulate him. Approval, devotion and blind loyalty strengthened his convictions…Confronted by someone bent on contradicting him, he would automatically go on the attack…In military matters – an area in which he was generally considered a well-informed amateur – Hitler knew how to impose his ideas on those of highest rank…A shrewd autocrat, Hitler hated sharing an ounce of power and concentrated on fomenting constant divisions among his subordinates. The crumbs of authority were parsimoniously distributed so that nobody could have too much.

In 2020, dear Reader, watching the White House from across the Atlantic, there is an unmistakable, quite remarkable resonance with the moment we’re in.