This ‘Suez crisis’ could be an opportunity

Until recently, the “Suez crisis” was the phrase used to describe a pivotal event in 1956. Egypt’s president Gamal Abdel Nasser had nationalized the Suez Canal, a move that angered Britain, which moved alongside France and Israel to retake control. Supported by the Soviets, the Egyptian demand for withdrawal of the British-French-Israeli forces ultimately led to US intervention. President Eisenhower’s administration put pressure on the occupying forces and they responded by ending hostilities.

Then came a new “Suez crisis”. Ever Given, the world’s largest container ship – about the size of the Eiffel Tower – was grounded in the Suez Canal, its bow wedged into the bank. The ship, operated by Taiwan-based Evergreen Marine Corp., was bound for the Netherlands when it ran aground. For days it blocked the key global trade route, disrupting the international flow of goods. The logjam around the Suez Canal affected shipments of crude oil, liquefied natural gas…and robusta coffee as well!

Roughly 12 per cent of global trade goes through the Suez with an average of 50 ships passing through the canal every day in convoys that begin in the early morning. All of that was choked off. Until the 200,000-tonne container ship was freed, it was feared it would take days and weeks to dislodge it. A blocked canal can be a smart internet meme – click here and here for the deluge of cleverness – but that was an unparalleled crisis.

As has often been pointed out, the flow of goods by sea accounts for 70 per cent of international trade. From antiquity, wars have been fought over maritime trade routes – the Greco-Persian conflict in the 5th century BC, for instance. (In 2015, I was in Egypt for the opening of the Suez Canal V 2.0. Click here, here and here for what I wrote at the time.)

This Suez crisis, of course, was not about military conflict so much as the shipping industry’s need to adapt. Is it wise to build such large vessels when they will need to navigate small canals?

Bloomberg (paywall) recently quoted a former captain Andrew Kinsey, who navigated a 300-metre cargo ship through the Suez and now serves a senior marine risk consultant at Allianz Global Corporate & Specialty. “It’s such a small canal,” he said of the Suez, “the winds are very rough and you have a really small margin for error and big consequences if errors happen.”

He added dolefully: “There will be vessels larger than this one that will be going through the Suez,” he said. “The next incident will be worse.” 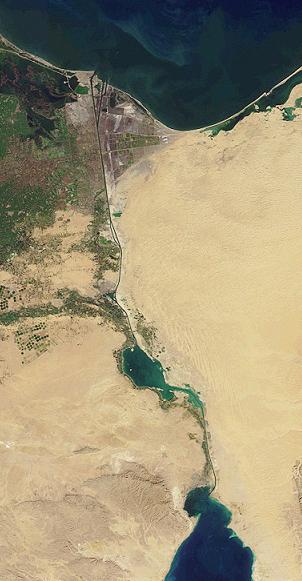