For three whole days this past week, our local swimming pool – a handsome, 50-metre, outdoor affair – has been playing a starring role in a movie. I exaggerate. I don’t know if it’s a starring role. That a film crew came down and co-opted the pool and the surrounding area is true. It’s rumoured to be for a Netflix film. Everything was hush-hush. The movie’s name is not known. All we were told is that the pool was, for the purposes of this film, supposed to be in Berlin!

If you look carefully at the photograph, it’s possible to see some of the German signage . In the run-up to the shoot, I remember the hasty paint job on some of the areas around the pool. The film company seems to have wanted a lot of terracotta reds. Perhaps the effect they were after was  Berlin-behind-the-Iron-Curtain? 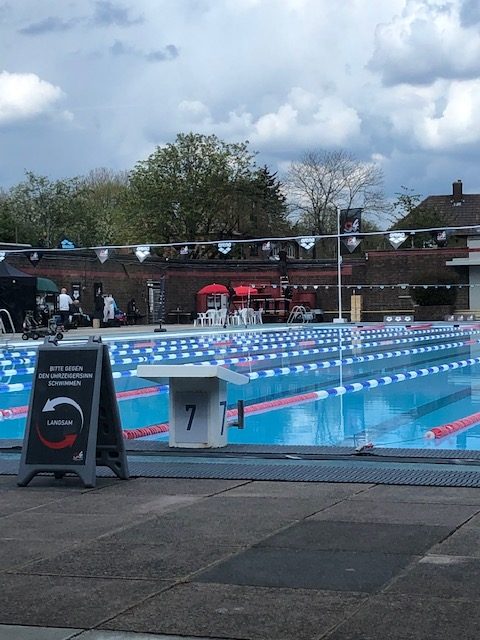 Whatever it was, consider how alt-reality is created for the eye of the camera. The 1986 Chernobyl nuclear accident may have occurred near Pripyat city, in the north of present-day Ukraine, but ‘Chernobyl’, the film, was shot mainly in Lithuania.

As Lithuania’s Kaunas University of Technology later noted, with pride, Kaunas city became Chernobyl, almost overnight. The “old radio factory” was transformed into a prison, a part of the tech-school became Moscow Hospital No.6 and an art deco flat became the apartment of a man who served on the Chernobyl research group.

We’ll have to wait for the Netflix film to see how that swimming pool in London became Berlin in another time and dimension.