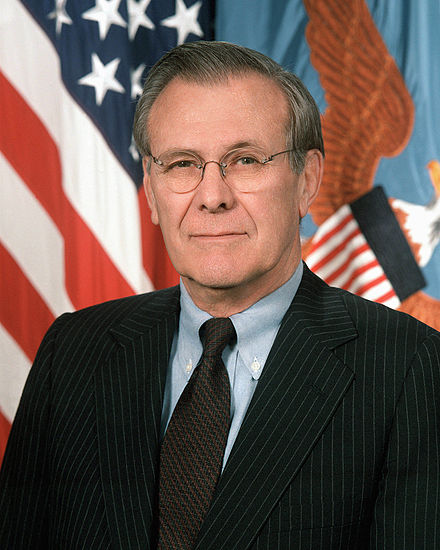 I didn’t realise until a day or so ago that Donald Rumsfeld was buried this week in Arlington Cemetery. He died at the end of June but the final ceremony of his passing coincided with America’s withdrawal from Afghanistan.

It served, the New York Times gravely noted, “as another coda to the 20-year conflict”.

I suppose, particularly for those who ply my trade and are eager to discern coincidences and common threads to draw a narrative together. The truth, of course, is that the date for Rumsfeld’s interment was set long before the events of the past fortnight.

The twinning of a funeral and Afghanistan’s fall to the Taliban makes a neat story but one that isn’t necessarily as coherent as we intone. That said, there are some reasons to note the final moment of Rumsfeld’s life and death.

Mostly because he was one of the chief architects of America’s over-reaction to 9/11. I don’t mean the invasion of Afghanistan; that was legitimate in light of the then Taliban government’s refusal to hand over the chief conspiracist. But as President George W. Bush’s secretary of defence, it was Rumsfeld who prescribed a sweeping course of action that would involve invading Iraq, bringing down Saddam Hussein and, in his words, going “massive”. It was Rumsfeld who advised that America should “sweep it all up. Things related and not”.

Though death normally has its own prescribed courtesies, Rumsfeld has received little of them. The Atlantic has tied Rumsfeld to America’s foreign policy problems, writing that he “was the worst secretary of defense in American history. Being newly dead shouldn’t spare him this distinction . . . He lacked the courage to doubt himself. He lacked the wisdom to change his mind”.

The Financial Times’ Ed Luce has mused with his usual thoughtfulness on “the importance of character” and how Rumsfeld’s betrayed two key flaws: he had both arrogance and ignorance. He was, Mr Luce wrote, “ignorant of his ignorance” and the tragedy was that America’s response to 9/11 was led by people like Rumsfeld.

It is a sad moment when a man is not spared even in death. But the truth is people like Rumsfeld, who epitomised the worst of America as well as its enormous power and reach, had already written his own epitaph long years ago. And it’s full of known knowns.