A slice of 17th century life in the National Gallery

This Sunday bank holiday weekend was a marker for me. It was the first time since the pandemic that I returned to the National Gallery.

I did have to book to go, and the Gallery wasn’t as crowded as it might have been on a pre-pandemic Sunday afternoon in August. Otherwise, it was much as usual.

What was particularly interesting to me, this time round, were paintings (some by relatively slight artists) that offered a slice of life from hundreds of years ago.

** Nicolaes Maes’ ‘The Idle Servant’: This mid-17th century depiction of a sleeping maid surrounded by unwashed dishes and pots while her mistress gestures at her was surprising. First, because the lady of the house doesn’t seem angry, but amused. Second, the mistress seems to be sharing the joke — about her helper’s congenital idleness — with us, the spectator. It made me wonder if this was a moralising message — be cheery, even when your hired hand isn’t doing what they should. Also, best to check below stairs every so often.

** Pieter de Hooch’s ‘The Courtyard of a House in Delft’: Another mid-17th century depiction, the architecture is fascinating in the contrast it offers — between the brick and stone archway leading from the paved courtyard into the passageway of a house and dilapidated brickwork of the wall on the right.

The passageway appears to be well maintained — prosperous, even — but the brickwork of the wall on the right is not. Is this about contrasting lifestyles and incomes? If so, would they be cheek by jowl?

** Carel Fabritius’ ‘A View of Delft, with a Musical Instrument Seller’s Stall’: Yet another mid-17th century view of Delft, this small (barely 8 inches by 14 inches) painting is by one of my favourite artists. I first heard about Fabritius in Donna Tart’s brilliant novel ‘The Goldfinch’. This little painting confirmed my fondness for him. It has a most unusual perspective — a distorted but believable view, suggesting that we, the spectators, are looking at the church, Town Hall and some houses along with the instrument seller.

** Adriaen Brouwer’s ‘Tavern Scene’: This 1635 scene from a dingy pub is a vibrant portrayal of drunkenness and the assault on a woman to the left of the room. I noticed the low stools and the dishes high up on the right wall but depiction of the woman’s travails is as shocking as it is explicit.

** Gerit Dou’s ‘A Poulterer’s Shop’: This 1670 painting of an everyday scene — a woman buying poultry — is puzzling for its grand frame. We see the customer and the poultry seller through an archway, a rather majestic one. What stands out though is the brilliant detail — the cloth under the bucket, the minutely worked figures in the frieze at the front below the sill, the duck’s wing and the basket of fowl.

The last painting I’ll pick out is not a slice of life per se but an interpretation of a Biblical story.

** Abraham Bloemaert’s ‘Lot and his Daughters’: This mid-16th century painting is a new acquisition by the National Gallery. It interprets a Biblical story, recounted in Genesis 19, of Lot’s daughters attempting to seduce their father in order to continue the human race because they were convinced there was “no man left on the earth”. According to a Leiden collection account I read, the plate of oysters — aphrodisiacs —”allude to the imminent sexual consummation planned by Lot’s daughters”. It’s one of many paintings on this theme. 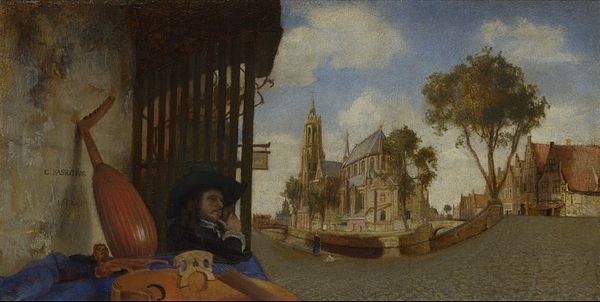