Inside the Afghan resettlement process in London

Within hours of Afghan refugees’ arrival in the UK, local councils sprang into action, as one volunteer explains

As the last evacuation flights left the international airport in Kabul at the end of August, I received an urgent email from my local council in London.

“As you know from the news,” it said, “there is a massive effort for donation [sic] for the Afghanistan Refugees as many of them are coming to the country with nothing. [We have] a mass of donations but the problem is […] urgent help is needed sorting everything.” The email ended on a plaintive note: “This is a massive task and any help you could give would be very greatly appreciated.”

I’ve been volunteering for the past 18 months, during the pandemic, on the council’s community outreach efforts and vaccination programme, so I signed on.

What I found on arrival was remarkable. A grand hotel near a tube station in south-east London had become the temporary home for nearly 700 Afghan families. Evacuees had been arriving since 23 August. As council officials told me, most had “nothing but the clothes they came over in”.

The families – no doubt traumatised by what had happened to their country and to themselves – were in quarantine. Strict pandemic protocols were in force and everyone had to take lateral flow tests before they were permitted to head upstairs in the elegant elevators.

Get dark money out of UK politics

Sign our petition to tell the government to tighten electoral laws and shine more light on political donations. We need to know who is giving what to our political parties.

A massive operation was under way. The hotel restaurant had become a warehouse, overflowing with donated clothes, some new, some used. Men’s clothing was placed in one area, on tables or chairs, grouped by type – trousers, shirts, T-shirts, vests – and then by size – small, medium, large, extra-large. Handwritten labels explained the categories.

It was the same process for women’s and children’s clothes, starting with outfits for newborns. Boxes of underwear and socks were sorted by gender. Shoes were in a separate area, as were books and toys. There was a small selection of toiletries too. On the floor sat cartons of supermarket long-life shopping bags and giant paper bags from clothing stores.

The rooms hummed with activity. Redeployed council workers, supplemented by volunteers, made strenuous efforts to bring some order to the operations hub as well as to lives upturned by catastrophic events.

Bags were made up for individual families, with workers choosing from the stacks of clothes, shoes, toiletries, headscarves, copies of the Quran, toys and books. Each bag was bespoke in that it tried to provide the checklist of specific requests (“large men’s vest”, “Babygro for 3-month-old”, “medium women’s dress”) filed by each family. Interpreters had helped compile the checklists, which were in English, Dari and Pashto.

Workers wrote the family’s hotel room number on a yellow stickie, stapled it to the shopping bag, now full to bursting, and set it near the door. Security guards delivered the bags, so that the evacuees would have the minimal comfort of a change of clothes, footwear, perhaps a prayer rug.

Occasionally, some of the bags were returned to the operations hub because the clothes were inappropriate or the wrong size. Then the officials and volunteers had to start over, studying the Afghan family’s checklist once again to fulfil their requests.

“I’m really happy to help,” said a young woman volunteer. “I feel that I’m doing something useful while I look for a job in publishing.”

“It was the council’s urgent appeal for assistance that drew me in,” said a regular volunteer with the nine-month-old vaccination drive. “Besides,” he added, “the vaccination efforts seem to be slowing down a bit.”

The local council hailed the “astonishing” scale of the operation and described themselves as “absolutely blown away by the generosity of local people trying to help refugees from Afghanistan in our borough, whether that’s in the form of donating money, clothing, prayer mats and other useful items, or even hosting refugees in their own homes”.

Acknowledging the significant challenges posed by the need to welcome “refugees into our borough”, councillors said that they were “now mobilising staff for three shifts a day”. They also called for urgent “government assistance to ensure that people are safely accommodated and treated with the care, dignity and support to which they are entitled”.

Similar efforts are under way across the UK as part of a plan that’s been named ‘Operation Warm Welcome’ by the government. Britain expects to take in roughly 20,000 Afghans over several years.

The nearest parallel to the overall Afghan resettlement scheme (in the US, UK and several other Western countries), may be Germany’s 2015 generosity towards a million refugees, mainly from war-torn Syria. More specifically, the British effort is reminiscent of its Syrian Vulnerable Persons Resettlement Scheme, which offered refuge to some 20,000 Syrians over five years from 2016.

“This effort will go on for a while, I think,” said a worker helplessly rummaging through piles of men’s vests. “The request is for ‘extra-large’, but we don’t seem to have any of those right now. Despite two runs at it, this checklist will still be in the ‘partly done’ file.”

It might almost be a metaphor for the entire process of resettling Afghans in a place far away from home. 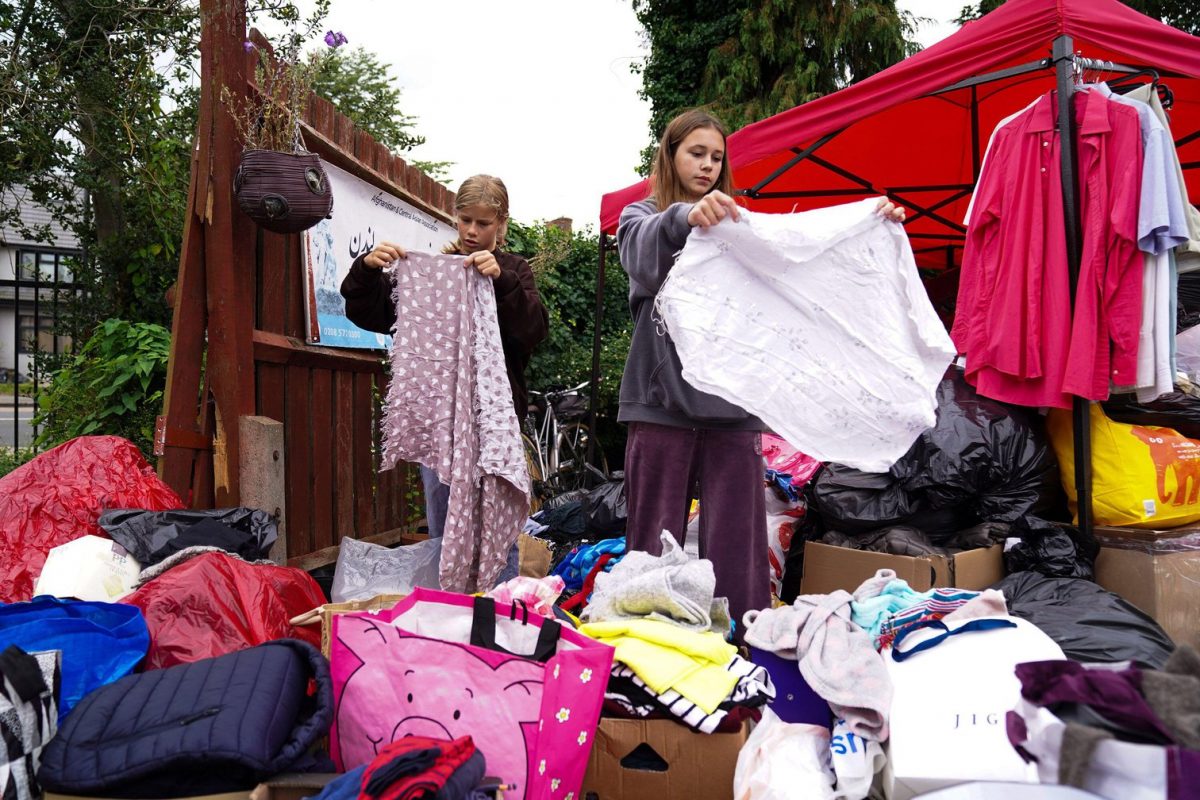