The world must take action now to prevent a deep and lasting humanitarian crisis. But what, if anything, can be done?

On 13 September, nearly a month after the Taliban’s takeover of Afghanistan, UN secretary-general Antonio Guterres convened a conference in Geneva to raise at least $600m in aid for the country. Donors outdid themselves, pledging more than $1bn, and Guterres hailed the generosity as a sign of international solidarity with the people of Afghanistan. The money, he said, would allow the UN to help Afghans “in their time of dire need”.

It’s true. Afghanistan’s need is great even though the country sits on a wealth of natural resources. This great need led the World Health Organization (WHO) chief, Tedros Adhanom Ghebreyesus, to visit Kabul on 20 September.

The $1bn agreed by donors is merely a short-term fix. Substantial chunks will go to the World Food Programme and the WHO to provide desperately needed food and to keep essential health facilities open.

But emergency aid cannot – and will not – solve the larger issue: How will Afghanistan continue to operate when neither the government nor the people have much hard cash, nor any prospects for getting it? The growing desperation is evident in the 14 September appeal by the Taliban’s acting foreign minister, Amir Khan Muttaqi, for the US to release Afghanistan’s foreign reserves. “America is a big country, they need to have a big heart,” Muttaqi said.

One of the world’s least developed countries by UN metrics, Afghanistan has been heavily dependent on overseas aid for the past 20 years.

In March, five months before the Taliban takeover, the World Bank noted that aid accounted for 42.9% of Afghanistan’s GDP. That was better than in 2009, when aid was 100% of GDP. But it still meant that Afghanistan’s service sector, as well as jobs and income were securely tied to what the World Bank described as “declining foreign grants” in the second decade of the US’s longest war.

After the Taliban’s return to power in Kabul, even those foreign grants have gone and the $1bn will not pay to run the government. Western donors, wary of appearing to support the Taliban, have cut off developmental aid, with dire and very visible implications for Afghanistan. The local currency, afghani, has started to drop precipitously and the price of essentials such as wheat, rice, sugar and cooking oil is rising. Khaama Press, an Afghan news agency, reports long lines outside banks, where weekly withdrawals are limited to 20,000 Afghanis or roughly $200.

As of now, there is no indication of if, when and how Afghanistan’s new rulers will replace the sources that supplied three-quarters of government spending. Donors including the US and groups such as the International Monetary Fund and the World Bank have indefinitely suspended the funding stream that paid the salaries of civil servants, teachers and health workers and allowed for the building and maintenance of public services such as schools and clinics.

The US has frozen most of the Afghan central bank’s foreign assets of $9.4bn, the bulk of which is in accounts with the New York Federal Reserve and US-based financial institutions. The International Monetary Fund (IMF) has blocked the Taliban government’s access to emergency reserves of $460m. The World Bank has suspended all its projects in the country. And the European Union has halted the €1.2bn ($1.4bn) in development assistance planned for Afghanistan over the next decade.

Five months before the Taliban takeover, aid accounted for 42.9% of Afghanistan’s GDP

This all adds up to a series of swingeing blows to Afghanistan, which has received roughly $65bn in aid since 2001, with the UK providing nearly 8% of the total.

And in a despairing piece for the Financial Times, Ajmal Ahmady, former head of Da Afghanistan Bank, the country’s central bank, warned of a massive economic crisis as well as a humanitarian one. “Even before recent events, the World Food Programme had announced that up to 14 million Afghans were food insecure,” Ahmady wrote. Now, he predicted living standards in Afghanistan would drop “significantly”. Levels of “real income will probably fall”, he said, “government services will have to be cut. Many government employees will be laid off …refugee flows will increase.”

The same point is forcefully made by UN high commissioner for refugees, Filippo Grandi. Warning of bigger refugee flows than the estimated half a million who have already left Afghanistan this year, Grandi said: “I fear that the collapse of services and of the economy that has already been described as a risk coupled perhaps with increased violence and tension could lead to a much greater displacement – internal and external – and this may happen very soon.” Despite all the international attention, Afghan refugees are not welcome
14 September 2021 | Rashmee Roshan Lall

But the dire economic situation is unlikely to be quickly resolved considering many members of the new Taliban government are on US or UN sanctions lists. Its acting interior minister, Sirajuddin Haqqani is on the FBI wanted list with a $5m bounty on his head and acting refugees minister, Khalil-ur-Rahman Haqqani, is wanted for terrorism offenses.

Accordingly, as Ahmady, the former central bank governor has urged, the world must “take action now” to prevent a deep and lasting humanitarian crisis. But what, if anything, can be done?

But what if the US remains unmoved? Can Taliban-led Afghanistan count on regional supporters such as China and Pakistan? Might Russia fill the vacuum created by the US withdrawal? Will brotherly solidarity with co-religionists prompt the Gulf Arab states to provide some developmental aid? Could Iran, cut off from the global market by US sanctions, somewhat like Taliban-ruled Afghanistan, make common cause? Might Turkey bump up its business interests and help shore up the Afghan economy?

The Taliban have great expectations of China. On 1 September, their spokesman, Zabihullah Mujahid, told Italian newspaper La Repubblica “China is our most important partner…It is ready to invest and rebuild our country.” And yet, other than $31m worth of emergency aid and coronavirus vaccines, Beijing has not revealed any big investment plans for Afghanistan. Observers discerned no mention of major deals in the bland read out from the 15 September meeting between foreign minister Muttaqi and Wang Yu, China’s ambassador in Kabul.

One reason may be the poor return on investment from existing Chinese projects in Afghanistan. The outlook is uncertain for the unmined $2.8bn copper project funded by the state-owned Metallurgical Corporation of China at Mes Aynak, near Kabul. The 2007 deal was touted as the largest foreign investment in Afghanistan’s history. China-watchers say Beijing may also be burned by its experience in Venezuela, where massive development loans had to be renewed and may remain unpaid.

Pakistan’s prime minister, Imran Khan, has called for the Taliban government to be given “international aid and help” but has limited his own country’s efforts to sending supplies of cooking oil and medicine. In any case, Pakistan could not afford to prop up Afghanistan.

Russia, which kept its Kabul embassy open after the Taliban takeover and has spoken warmly of Afghanistan’s new rulers, is not generous with development aid compared to other countries.

Thus far, Qatar, the UAE, Bahrain and Kuwait have supported evacuation efforts from Afghanistan. Qatar has said it will operate daily aid flights to Afghanistan; Bahrain and the UAE have sent emergency food and medical aid.

As for Iran, it resumed fuel exports to Afghanistan eight days after the Taliban’s 15 August return to power. The arrangement is mutually beneficial. The Taliban are said to be able to use dollars from narcotics operations to buy essential commodities from dollar-starved Iran. The money is deposited at the Afghan branch of Iran’s state-owned Bank Melli, according to reports citing Hamid Hosseini, a spokesman at Iran’s Oil, Gas and Petrochemical Products Exporters’ Union.

Finally, there is Turkey. Süleyman Ciliv, head of the Turkey-Afghanistan Business Council, has expressed cautious hope for improved economic relations “if the necessary business environment is ensured (in Afghanistan) and the conflicts end”. But a Turkish government summary of bilateral economic and trade relations shows tepid growth and slow movement on issues such as the negotiation of a double taxation prevention agreement. Kabul and Ankara last discussed the subject in April 2019.

What’s clear is that the humanitarian crisis facing Afghanistan could easily snowball into a full-blown economic one. Kevin Watkins, former chief executive of Save the Children, has suggested that the same model used by the World Bank and bilateral aid donors in Yemen could be applied in Afghanistan. It would bypass the government and operate through UN agencies and NGOs.

There is something to be said for the idea. After all, as the UN secretary-general recently noted, “The international community must find ways to make cash available to allow the Afghan economy to breathe. A total collapse would have devastating consequences to the people”. 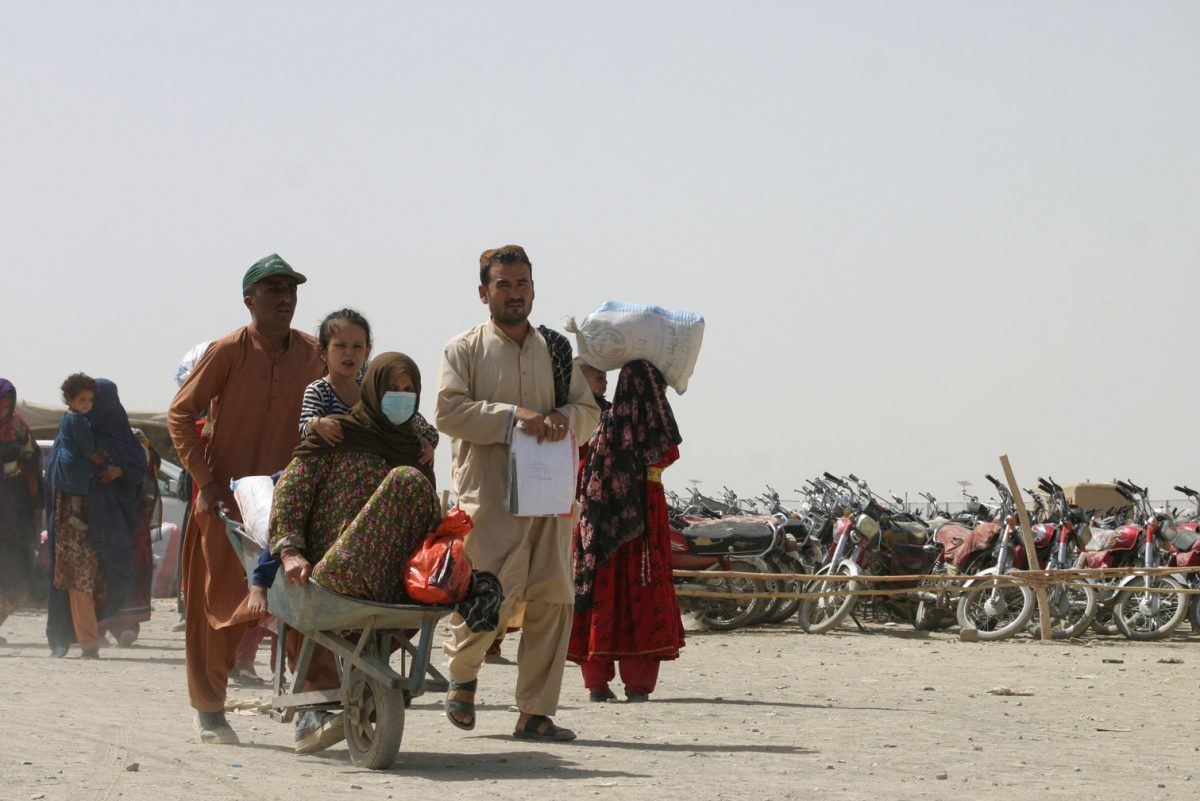