At 08:37 one weekday morning, we got to see the “cloud car” of Adams Morgan, in Washington, D.C. Through the traffic came a sedan, painted in shades of pink, orange and yellow and topped by an enormous, periwinkle-coloured cloud.

For something that looked as if its owner liked to  move fast and break things (to quote Mark Zuckerberg), the car set a sedate pace. We stared, craning our necks as it disappeared into the distance.

Why would anyone drive around in a car like that? What statement was the driver trying to make?

Turns out the ‘cloud car’ originally had an environmental message and now, does the job of spreading cheer. Its owner posted the following on Instagram in April this year to explain why he wound with a vehicle adorned with a large cloud.

“What is it? People have questions, here’s my final answer 😉 it’s just art, it’s a cloud, it’s not very heavy, mostly air with a thin wire shell. I was happy living without a car #bikelife, but then I was hired by a coalition of environmental and consumer rights organizations to conceive of and build a sculpture on a car that would deliver signed petitions to Ford headquarters in Detroit. We were calling on Ford to stop working with Trump on rolling back clean fuel standards set by Obama. I worked hard and fast with friends to make the prop in 1 week. It was a black smoke/smog cloud coming out of a 2nd tailpipe. It even had a remote controlled smoke machine in the trunk coming out of a 3rd tailpipe for extra effect on the trip. See pic 10.. Eventually the car came back to DC and became a family car, and I had to cut off the tail so I could parallel park in the city (and so people would stop calling it a rat, lol) Later I painted it white, because who wants to live with a dark cloud always hanging over their head? (people started calling it an igloo, lol) Last week I fixed up the cloud with some friends after an unfortunate drive-thru accident and decided a new paint job was needed. I decided a sunset theme would go well with the cloud and it was a good choice cause my daughter loves it.” 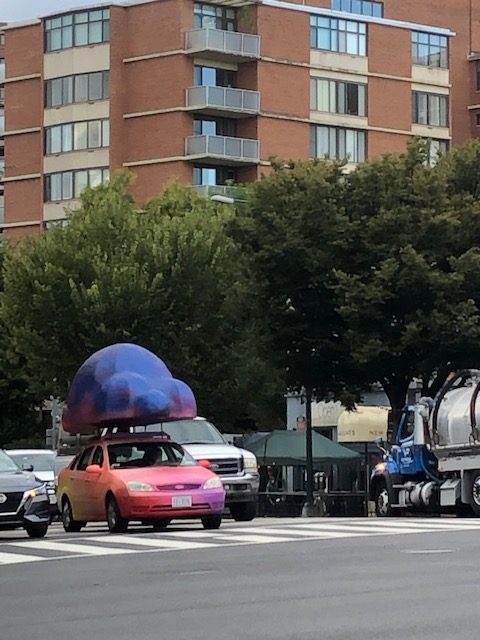