As the calendar year wanes, several cultures mark a day of the dead, an all souls’ day or some other form of mourning ritual that allows for memory and forgetting. In Hinduism, an annual shraddha ceremony in honour of a dead ancestor is generally on the anniversary of their passing.

One of the more remarkable modern expressions of grief has to be supermodel Iman’s fragrant homage to her late husband David Bowie and their nearly quarter-century relationship.

Iman’s perfume, Love Memoir, has subtle notes of her life with Bowie. It’s in a box with an illustration of her watercolour of a sunset in upstate New York where they lived privately and happily. “The words inside the bottle are words I’ve been writing about love,” Iman recently told ‘The New York Times’. The bottle itself is shaped like two stacked stones, which evoke the cairns she has been building in the woods around her house to sort out her memories. “Stacking the stones, I began to do one cairn every day. I began to experience the memories more joyfully. And it slowly became less painful for me to see these beautiful sunsets my husband loved without thinking, ‘I have to show this to David’.”

And finally, there is the actual perfume. It contains essence of vetiver, Bowie’s favourite fragrance.

The entire package is an expression of grief and love, probably one of the most evocative modern rituals of remembrance by someone famous, for their equally famous partner.

And it comes in time for Christmas! Genius. 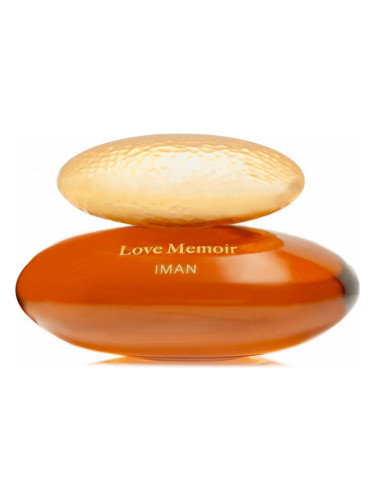