Are the unvaccinated becoming modern-day lepers?

Will ‘health taxes’, fines, bans on foreign travel and a French strategy of ‘pissing them off’ nudge anti-vaxxers towards the COVID-19 jab?

From Italy to Iran, opinion — and policy positions — are hardening against those who refuse COVID vaccines. At the same time, opposition to vaccine mandates remains fierce and a weary world faces an impasse over the best way to manage the pandemic.

Republican governors in the US continue to push the cause of the vaccine-resistant, signing laws that bar companies and schools from insisting on vaccination for their employees.

Meanwhile, Quebec has announced a ‘health tax ‘ — Canada’s first — on those who refuse COVID jabs for non-medical reasons.

And the world’s top-ranked tennis player Novak Djokovic, Serbia’s best-known vaccine sceptic, has opened up a difficult prospect for international sport. Should anti-vax sports stars be allowed to travel the world to compete? After the Australian Open, the next Grand Slam tournament is the French Open in May, and in between, there are the ATP Masters 1000 tournaments in Indian Wells, California and Miami, Florida. But the US requires all visitors to be fully vaccinated to travel to the country and only limited exceptions apply.

However, the French government later took a harder line, saying professional athletes need to be vaccinated or recently recovered from COVID in order to enter France to take part in competitions. French president Emmanuel Macron had already told Le Parisien he wanted to “piss off” the unjabbed by making daily life increasingly difficult for them. “I am not about pissing off the French people,” Macron said. “But as for the unvaccinated, I really want to piss them off. And we will continue to do this, to the end. This is the strategy.” Days later, France’s National Assembly approved a bill that creates a ‘vaccine pass’ for restaurants, public transport and entertainment venues. Replacing a less-strict ‘health pass’, it removes the loophole that allowed the unvaccinated to lead normal lives by showing proof of a negative COVID test.

Macron’s aggressive stance towards the unvaccinated is in lockstep with national governments in North America. US President Joe Biden has repeatedly said there was no excuse for anyone being unvaccinated, and that this was a pandemic of the unvaccinated. In early January, Canada’s prime minister, Justin Trudeau, said that Canadians were “angry [about] the risk posed to all of us by unvaccinated people”. He added: “People are seeing cancer treatments and elective surgeries put off because beds are filled with people who chose not to get vaccinated; they’re frustrated.”

Back in December, Britain’s health secretary, Sajid Javid, took much the same line. He admonished Britain’s roughly five million unjabbed people — 10% of those eligible for COVID vaccine doses — who chose not to be vaccinated. “They must really think about the damage they are doing to society,” Javid said. “They take up hospital beds that could have been used for someone with maybe a heart problem, or maybe someone who is waiting for elective surgery. But instead of protecting themselves and protecting the community they choose not to get vaccinated”. The prime minister, Boris Johnson, has also called for a “national conversation” about how Britain’s NHS can cope with new COVID variants in the face of stubborn anti-vaxxers. “I don’t believe we can keep going indefinitely with non-pharmaceutical interventions, restrictions on people’s way of life, just because a substantial proportion of the population still, sadly, has not got vaccinated,” Johnson said.

So, what’s the solution to vaccine scepticism? Is there one?

In November, the Austrian government decided to incarcerate the unvaccinated in a targeted lockdown. Only 65% of Austria’s population is fully vaccinated — one of the lowest rates in western Europe — and from 1 February, Chancellor Alexander Schallenberg’s government will impose criminal fines of up to €3,600 every three months on anyone over the age of 14 who refuses to be vaccinated.

However, some question the wisdom of a pandemic strategy that turns the unvaccinated into modern-day ‘lepers’, to use the anguished term employed by various clergymen, laypeople and medics. Last year, a bishop in Melbourne expressed concern that parishioners without proof of vaccination would be turned into “the lepers of Jesus’s day”. An unvaccinated British woman who is medically exempt has said she feels “like a leper” and the letters column of a local UK newspaper has warned against confining the unvaccinated “to a walking leper colony”. Even Amnesty International has weighed in, urging Italy to soften its increasingly tough plans for the unvaccinated and to allow them to go to work and to use public transport “ without discrimination “. On 6 January, Italy made a COVID vaccination mandatory for everybody over the age of 50, and from 15 February, new rules will bar those over 50 from the workplace unless they are vaccinated or recently recovered from the disease.

But the world is struggling to deal with the fast-spreading Omicron variant. On 11 January, the US had more COVID cases in hospital than at any time in the pandemic, and data shows that the unvaccinated are more likely to get seriously ill if they contract the disease. While there is no national picture for the US, as not all states track vaccination status, public statistics from Virginia, Colorado, Utah, Connecticut and Minnesota show that those admitted to hospital in the week ending 6 January were overwhelmingly unvaccinated. And in early January, the governor of Maryland said the unvaccinated minority of his state’s population accounted for 75% of COVID hospitalisations. The UK’s Intensive Care National Audit and Research Centre reports that 61% of COVID patients admitted to critical care in England, Wales and Northern Ireland in December 2021 were unvaccinated.

Accordingly, there is growing impatience with those who claim the right not to take two doses of the coronavirus vaccine — and a booster — if offered. Governments and businesses are trying different strategies to nudge the unvaccinated.

Consider this. Clothes retailer Next, Swedish furniture company IKEA and utility provider Wessex Water have become the latest companies to slash sick pay entitlements for unvaccinated staff in the UK who have to self-isolate because of exposure to COVID, joining a lengthening list of firms adopting a similar policy. It’s been months since Britain’s fourth-largest supermarket company, Morrisons, cut sick pay for unvaccinated workers who had to self-isolate.

In September last year, Virgin Atlantic announced that it would not hire new cabin crew or pilots who are not fully vaccinated against COVID. And Hungarian carrier Wizz Air, which serves several UK airports, required its flight crews to be vaccinated by the end of 2021.

This year has begun unpropitiously for the unvaccinated. In January, Greece started to levy monthly fines on unvaccinated people over 60, the United Arab Emirates banned its unvaccinated citizens from leaving the country, and Germany continued to debate a vaccine mandate even as unvaccinated people remain barred from much of public life. In December, Iran launched a ‘smart protocols’ plan that imposes similar restrictions.

By all indications, life will only get harder for the unvaccinated. There is increasing interest in ​​Singapore’s tough policy, introduced last year, which forces people who remain unvaccinated by choice to pay for the cost of their own medical care in case of COVID-induced hospitalisation.

Will compulsory vaccination, fines, a two-tier healthcare system or even incarceration work when the appeal to science, reason and community feeling has not?

For months, readers of the authoritative medical journal The Lancet have been engaged in passionate correspondence on the issue. Those who believe “stigmatising the unvaccinated is not justified” argue that “vaccinated individuals continue to have a relevant role in transmission”, even though they have a lower risk of severe disease.

High-profile examples of vaccinated people who contract COVID, particularly since the arrival of the Omicron variant, only add to the sense of injustice expressed by the unvaccinated. On 10 January, for instance, the Mexican president, Andres Manuel Lopez Obrador, made headlines as one of the few world leaders to contract the coronavirus twice despite being double-jabbed and boosted. Clearly, Obrador’s example would not help make the case for compulsory vaccination to end the pandemic.

Instead, there are suggestions that a gentler path forward may be more effective, possibly drawing on the lessons offered by the US’s polio vaccination effort of the 1950s. The polio vaccine, considered one of the most significant biomedical advances of the 20th century, was key to ending a scourge for which there was no cure and that left hundreds of thousands paralysed or dead around the world. To combat vaccine hesitancy, the US used volunteers from local communities to disseminate key information. High-profile advocates, such as Judy Garland and Marilyn Monroe, were recruited to spread the word. And Elvis Presley was vaccinated backstage at TV’s popular Ed Sullivan Show.

The consistent message during the polio years was ‘we’re all in this together,’ according to Stacey Stewart, head of US non-profit March of Dimes, which was founded by President Franklin D Roosevelt to help combat polio. This same message, said Stewart, must come across loud and clear today, by “combating the misinformation while also making sure that entrusted voices are providing the most accurate information to people”. She added that it is crucial to ensure “the good information from the trusted experts starts to drown out the misinformation that’s out there”.

But some believe messages alone won’t work and a tougher strategy is needed. Peter Singer, an Australian philosopher and a professor of bioethics at Princeton University, has offered a controversial solution. He argues that since vaccination reduces the likelihood of severe illness, vaccinated patients who are unfortunate enough to need hospitalisation have a stronger moral claim to treatment because they have made an effort to avoid it. Accordingly, in a situation where a vaccinated and an unvaccinated patient both need “the last available bed in a hospital’s intensive care unit, the vaccinated patient should get it”.

It is a hypothetical, and extreme, articulation of the moral — and logical — obligation for everyone to get vaccinated, both in their own interest and in that of public health. But, along with already-enacted policies like Singapore’s, it does illustrate the difficult choices that have to be made about the limits of individual freedom two years into a global pandemic. 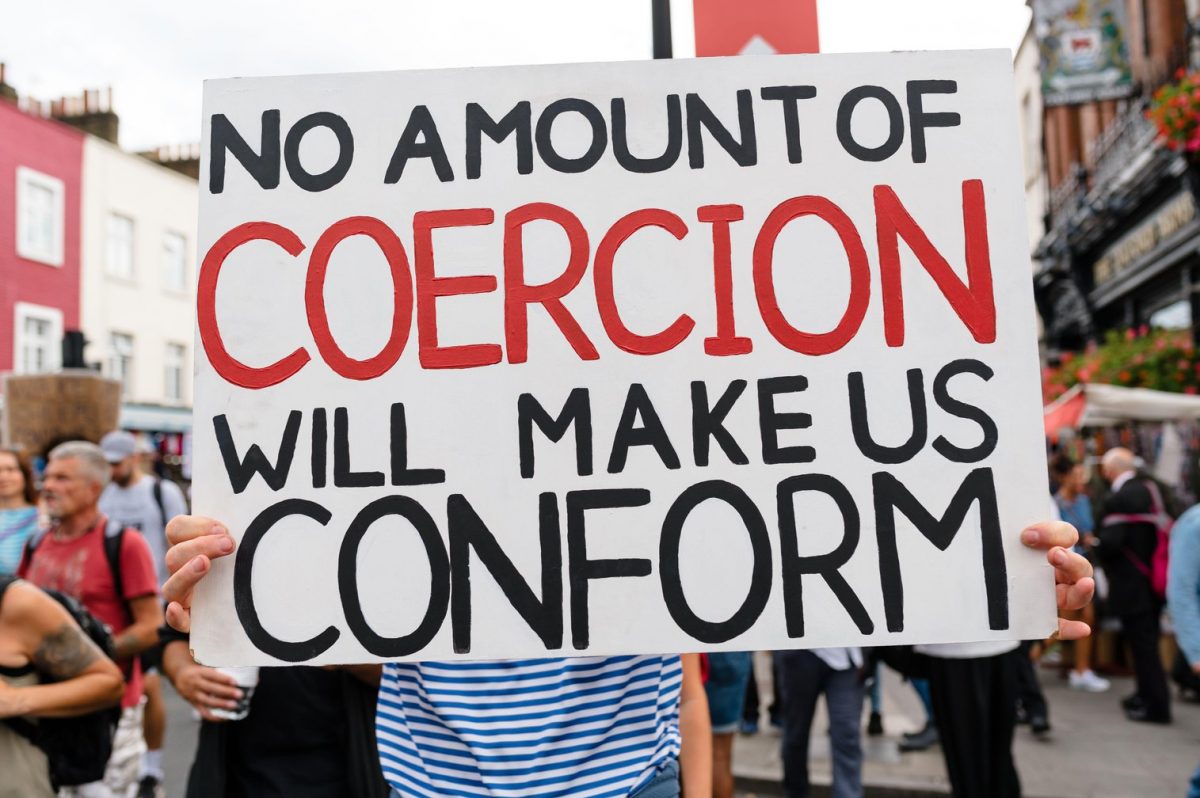