At school in India, we learnt to honour ‘Netaji’ Bose, not to imitate him

With respect to the sort of responses drawn by any commentary (questioning, even if not exactly critical) on the pronouncements and politics of India’s present-day rulers, I refer you to Ed Luce. Mr Luce is currently US National Editor of the Financial Times. In a previous avatar, he was the paper’s Delhi correspondent.

As a fine writer and man of discernment – with a low tolerance of humbug and BS – Mr Luce is well placed to analyse, from afar, the continuing change of India’s national propensities. (What’s more, as he was posted in both New Delhi and Washington, Mr Luce is ideally situated to draw dispiriting if very real parallels on why and how countries change. Slowly…and then all at once!)

Anyway, Mr Luce recently recounted the result of his response to a tweet by India’s prime minister Narendra Modi about giving a statue of Subhas Chandra Bose pride of place at India Gate in Delhi. Mr Luce tweeted: “Latest exhibit of Modi’s fascist ideology. Bose was an admirer of Hitler and a pawn of the Axis powers.”

This led, as Mr Luce described it, to a welter of enraged comments, which basically suggested, in Mr Luce’s words that “Adolf Hitler was a far greater friend of India than Winston Churchill.”

The tonne of criticism of Mr Luce’s plainspeak must be put in context.  Indians can be prickly about Bose, whose motivations were to get the British out of India. Indians dislike Churchill, correctly judging him to be racist and dismissive of them. Churchill is considered to be both symbol and standard-bearer of the unfair British imperial system. Bose, of course, was fighting that system, a bigger force than he knew the Indian independence movement could take on. So, Bose wanted to harness the power of others  opposed to the British, in order to free India. So, he was certainly a pragmatic ally of Hitler.

Was there more than that, though? Bose, remember, spent a year in Berlin as the Fuhrer’s guest. The question about supping with the devil is an important one. Is expediency to be given a higher place in our moral reckoning than any ethical consideration?

Surely, it matters that Bose saw the Nazis as less immoral than the fading British Raj? How do you rate genocide vs imperialism?

I think the approach towards Bose some decades ago, when I was growing up in India, was just about right. “Netaji” Bose, as we called him, was given a place of respect and honour in the pantheon of freedom fighters. To a lesser extent, so was Bhagat Singh, the revolutionary freedom fighter who was involved in the murder of a junior British police officer. But we were not told to emulate Bose or Singh. We were given different role models, those who had consciously taken the path of non-violence. We were not told to make moral swaps. 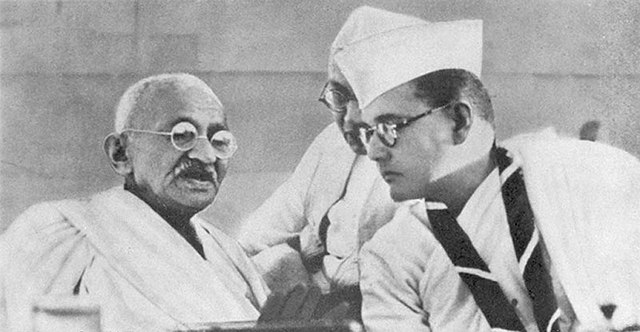