It’s been two years since China’s President Xi Jinping met a world leader in person. But he’s breaking his strict social distancing rules for Russia’s Vladimir Putin as the Winter Olympics get off to a much-heralded, if controversial start.

Both men will grin and bare it, which is to say it’s evident their countries take comfort in standing together at this moment. The Americans and some of their allies aren’t sending official representatives (just the athletes) to the games. So, Russia’s support – in person, and at the highest level – is very welcome.

Russia meanwhile, wants China to stand strongly with him, while the Ukraine crisis plays itself out. A new gas pipeline may be in the works, all the way from Siberia to China.

But for all the evident bonhomie, the strong whiff of some unknown unknowns will linger in the air. For all Mr Putin’s aggressiveness, it’s fair to assume he doesn’t really want to invade Ukraine and become America’s chief geopolitical adversary even for a little while. But if he manages to push the Americans into a corner by means of coercive diplomacy, China will return to being the focus of US national security strategy.

As Minxin Pei, professor of government at Claremont McKenna College, has pointed out on Project Syndicate, the Chinese are playing their cards very close to their chest: “While the heightened tensions dominate Western media headlines, Ukraine receives scant coverage in the official Chinese press. Between December 15 (when Putin and Xi held a virtual summit) and January 24 this year, The People’s Daily, the official mouthpiece of the Communist Party of China, carried only one article about the crisis – on the inconclusive talks in mid-January between Russia and the US and its NATO allies. Editorials or commentaries voicing Chinese support for Russia also are notable by their absence.”

Even more interesting, notes the Professor, is the very different version of the Putin-Xi summit released by Beijing and Moscow: “the Kremlin claimed that Xi supported Putin’s demand for Western security guarantees precluding NATO’s further eastward expansion, but the Chinese version, published by the official Xinhua news agency, contained no such reference.” Instead, Mr Xi’s statement was quite vague.

As they grin and bare it, the Chinese and Russian presidents will grin and bear it. 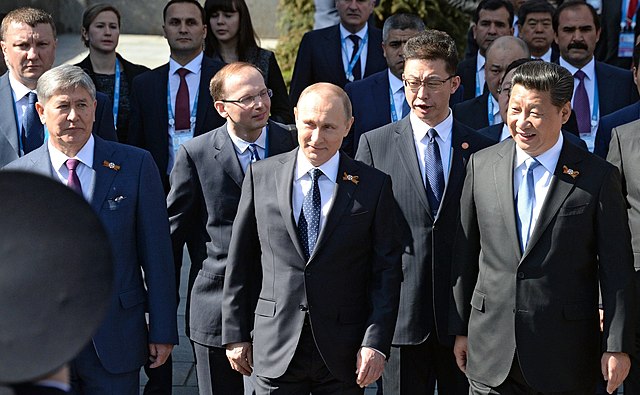