Gen Z and the business of being woke

Genuine corporate activism can pay off, but consumers can smell woke-washing – from mayo with a purpose to M&Ms with personalities – a mile off

In 2019, before the pandemic hit, when holiday travel was an uncomplicated process that went from aspiration to action in one easy step, Debbie* prepared for her summer vacation by shopping online at Shein. She knew from TikTok and Instagram that the Chinese ultra-fast fashion giant was, in her words, “super cheap”. Shein seemed to perfectly match Debbie’s very specific idea of what she wanted: “Jewellery that I could wear on holiday and just throw away later.”

Three years on, Debbie isn’t so sure she do her holiday shopping at Shein again. She says she now has ethical concerns about the company, having looked at an investigation into its ultra-fast shopping ecosystem by media outlet Rest of World. Debbie’s concerns and her youth – she is finishing a bachelor’s degree at the University of London – make her a typical member of Generation Z.

The first generation of true digital natives, Gen Z loosely consists of people born between 1995 and 2010. Their “main spur to consumption”, according to a 2018 McKinsey study of Gen Z habits, is “the search for truth, in both a personal and a communal form”. This makes Gen Z more passionate than millennials about buying products from brands that align with their values. And Gen Z’s values – social and environmental justice – matter hugely to business. At 2.5 billion people, Gen Z accounts for a third of the world’s population; nine out of every ten Gen Z-ers live in Asia and other emerging markets.

A year after its study of Gen Z predilections, McKinsey issued ‘The State of Fashion’ report, in partnership with the industry news site, The Business of Fashion. That report noted the rise of “woke” consumers as one of ten key trends. Being woke, according to Merriam-Webster, means, being “aware of and actively attentive to important facts and issues (especially issues of racial and social justice)”, though Gen Z adds environmental justice to the mix.

But it’s not just the fashion industry. Businesses across the spectrum know they must show how much they care about social and political issues. So they do. More and more.

Corporate activism is good for business

Think cosmetics company The Body Shop’s vocal criticism of the British government’s attempts late last year to push through a new policing law that would impose severe penalties on protesters. Think ice cream brand Ben & Jerry’s statement on the same issue: “This bill is dangerous. It’s authoritarian. It’s draconian.” The bill is yet to be passed and is going back and forth between both Houses of Parliament in a process known as ping pong.

Ben & Jerry’s has also issued hard-hitting, repeated criticisms of the UK government’s “anti-refugee agenda”. Further back, there was Nike’s 2018 ad in support of American footballer Colin Kaepernick’s controversial decision to highlight racial injustice and police brutality by kneeling during the US national anthem before NFL games. And Levi’s ongoing, four-year-old campaign against “America’s gun violence epidemic”.

Californian outdoor clothing brand Patagonia, a family-owned company, has always worn its activism as a badge of honour, something its chief executive once said is easier “when you do not have to answer to shareholders”. And Penzeys Spices, a family-owned firm in Wisconsin, presumably works to the same principle, with founder Bill Penzey liberally dispensing politically progressive screeds along with jars of spices and discounts themed around issues such as racism and continued Republican support for Donald Trump. In his July 2018 newsletter to customers, Penzey said that “standing up against everything the Republican Party has come to stand for is really, really, really (+76 more reallys), really good for business.”

With or without shareholders, is taking a stand actually good for business? It’s hard to give a clear answer across the board, but trends suggest so. When Unilever’s former CEO, Paul Polman, stepped down in 2019, after a decade in the job, he declared that the company’s “290% shareholder return” was the “result of a more socially and environmentally responsible model. In fact it’s the only way to ensure long-term returns. Put yourself to [the] service of society.”

Experts say that Polman’s Unilever Sustainable Living Plan, a scheme to double the global consumer goods group’s revenue while slashing its carbon footprint by half, helped the company in terms of reputation and sales, even as it continued to face allegations of underpaying tax.

Omid Aschari, professor of strategic management at the University of St Gallen in Switzerland, pointed openDemocracy towards “a promising Boston Consulting Group study that found that companies with strong ESG performances have a higher valuation”.

“I’m in marketing,” says professor David Reibstein, from the Wharton School of Business, “if one is indifferent or not taking a position, it puts you at a disadvantage.”

But only if you mean it

But Generation Z are savvy and can smell ‘woke washing’ a mile off. They want a company’s stance to be ‘real’.

Reibstein cites Nike’s support for Kaepernick, which he sees as a “classic” example of a company “putting themselves at risk” by taking a position on a polarising issue. And Nike did suffer “a short-term dip,” he noted. There were heated calls for a boycott of the company right after the Kaepernick ad appeared, with some investors selling their shares and critics torching Nike shoes.

“It’s not unrelated to the balance sheet and there is some business logic to it, but that is not the only driver. Sometimes, companies will readily do something that is not profitable because they think my employees, my shareholders, my customers feel better,” says Reibstein.

But the risk can pay off, for the bottom line as well as for a company’s reputation. Soon after the Kaepernick campaign, Edison Trends, a digital commerce research company, noted that Nike had better online sales than the previous year.

Wokeness doesn’t always work, however. A decision by Unilever’s chief executive, Alan Jope, last November to give Hellmann’s mayonnaise a purpose – “Fighting against food waste” — has drawn robust criticism, not least from one of its top shareholders. Terry Smith, who runs the £28.9bn Fundsmith Equity Fund, wrote in his annual letter to investors that the global consumer goods group had “clearly lost the plot” by trying to give mayo any purpose beyond salads and sandwiches. Unilever’s management is “obsessed with publicly displaying sustainability credentials at the expense of focusing on the fundamentals of the business,” Smith added.

Opinion is also mixed about the real value of confectioner Mars Wrigley’s announcement last month that it will make its multi-coloured M&Ms mascots more ‘inclusive’ and ‘progressive’ and less gender-specific. M&Ms’ planned makeover feels reminiscent of Starbucks’ ill-fated and badly panned 2015 #RaceTogether campaign, which was supposed to unite customers in conversations about race as baristas handed over their coffee cups. Even commentators in progressive media outlets have poked fun at the newly anthropomorphised M&Ms characters, insisting “this is not what Gen Z wants”.

So, what can businesses do that Gen Z wants? Or does their profit drive mean companies are fundamentally incapable of delivering real social justice or a healthy planet? Philosopher Kyle Hubbard, who researches business ethics at Saint Anselm College in New Hampshire, says a nuanced answer is in order: “If we assume that ethics requires actions that are done purely for duty’s sake or because the ethical action is the right one to do, then for-profit businesses by nature cannot satisfy this demand. They will always be at least partly motivated by profit.” He added, “However, I think for-profit businesses can increase social welfare to some extent, while pursuing a profit.”

A new form of capitalism

Some business experts say that purpose is the new form of capitalism. “A company can’t thrive or be viable unless it understands it is interwoven in society,” says Aschari, who teaches St Gallen’s globally top-ranked Strategy and International Management (SIM) master’s programme. He says his students’ conversations about ethics in business have changed in the past decade from utilitarianism to being focussed on ethics. The SIM course has changed accordingly.

From 2009, SIM has included an ‘imagination challenge’ segment, a small four-credits part of the overall 90-credits programme. It requires students to initiate, develop and implement something that serves a social cause, perhaps a water-purification project in Vietnam or a scheme helping single mothers start up their own companies.

“Students measure social impact, how to connect in an ever-changing world and how to be adaptable,” says Aschari. The idea is to bring about ‘system change’, to train tomorrow’s C-suite executives to care about the company and the effect it is having on everyone and everything around it. It also means that St Gallen’s SIM falls within the ethics, social responsibility and sustainability course parameters suggested for business schools by the European Foundation for Management Development, an accreditation body.

Aschari acknowledges his programme is not a quick fix for socially irresponsible capitalism or performative corporate wokery sans purpose. Instead, it enshrines gradualism, a process of change that works to “raise people who care about the fate of a company. And then, the transformation of a company”.

This may be in sync with Gen Z propensities. According to the 2018 McKinsey report, 51% of Gen Z respondents believe in systemic change from within, compared to just 43% of millennials and all other older generations.

But until systemic change kicks in, what? Businesses must respond to customers, including Gen Z-ers, who will hold them to account. “If companies don’t believe in the things they say,” warns Aschari, “they underestimate the power of the young and they will pay the bill.”

Does Debbie, the turned-off former Shein customer, recognise her power? She says she wants to trust the companies she buys from and feels let– down if they lie. Debbie mentions the eco-friendly claims made by Swedish fast-fashion retailer H&M, as part of its Conscious Choice product line, and says to a classmate: “They’re one of the worst, aren’t they?” The other young woman nods. In 2021, pressure group Changing Markets Foundation accused H&M and other British high street brands of “greenwashing” and said that “​​H&M’s Conscious Collection actually contains a higher percentage of synthetics than its main collection (72% versus 61%, respectively).” The UK competition and markets watchdog is investigating fashion brands that make misleading declarations about their environmental credentials, though it is not yet clear whether H&M will be included in its review.

When contacted by openDemocracy, H&M said “we don’t have a spokesperson available to contribute on this occasion”. But even if the company had been able to respond, a shopper like Debbie may not have believed them anyway.

So, it does pay to be woke, but only if you mean it. 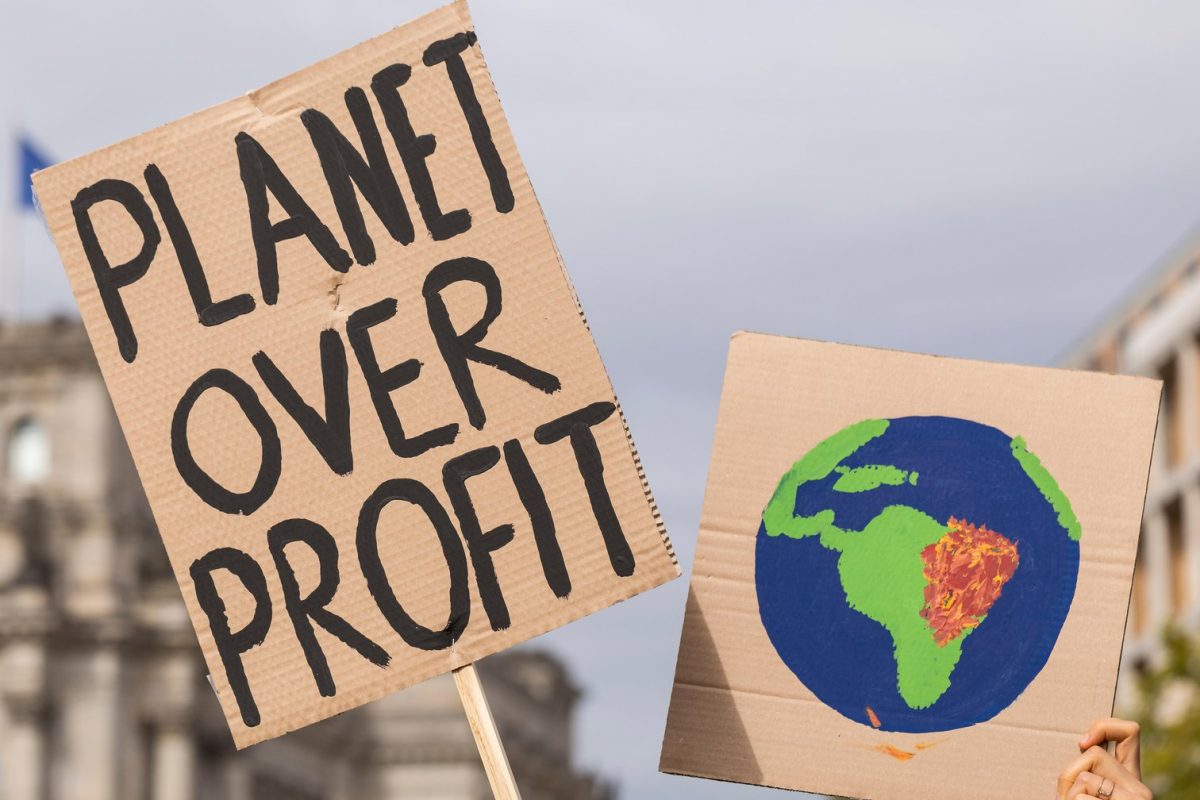