Eastern Europe’s borscht battles are like the hummus hostilities in the Middle East, the Jollof Rice jousts in West Africa, the Balkans’ ajvar agitation and South America’s pisco provocations.

There was a flurry of frontline moves in the hummus hostilities last decade but since 2017, matters have largely been at a stalemate.

As for the hummus hostilities, they are seemingly a lot less fierce at the moment.

There was a flurry of frontline moves in the last decade but since 2017, matters have largely been at a stalemate.

So, for example, a Google search for news on “hummus” on April 29 yields 815,000 results, most of which are rather anodyne stories, such as “You’ve been eating hummus all wrong – you have to bake it” and “Where to dig into hummus in London”.

Make no mistake though, matters are not resolved.

Who does hummus really belong to?

Come hither, and eat of the bread, and dip thy morsel in the hometz. Book of Ruth

Noah Robertson on Arab America notes a 13th century record from Egypt in the cookbook ‘Kitab Wasf al-Atima al-Mutada’. But that version has vinegar and no tahini or garlic. Another 13th century record from Syria in ‘Kitāb al-Wusla ilā l-habīb’ also has nothing but chickpeas and lemon. Five-hundred years on, and a Damascus recipe listed that delicious and emollient combination of chickpeas, tahini, garlic and lemon. This was, as Mr Robertson says, “the earliest record of ‘real’ hummus.” But then there could be another origin, he says, in which hummus is cast as a Jewish food. This is on account of a passage from the Book of Ruth, which reads as follows: “Come hither, and eat of the bread, and dip thy morsel in the hometz.” Mr Robertson says some Israelis interpret “hometz” as hummus, “but its direct translation is ‘vinegar’.”

But the Arabs, of course, consider hummus very much their own. After all, the very word “hummus” is Arabic for chickpeas – the dip’s name is actually hummus bi tahini or chickpeas with sesame seed paste.

As we can see, that familiar beige dip is a regional dividing force. But it’s a unifier too.

Next, we’ll look at the high point of the so-called “Hummus Wars” of the last decade. 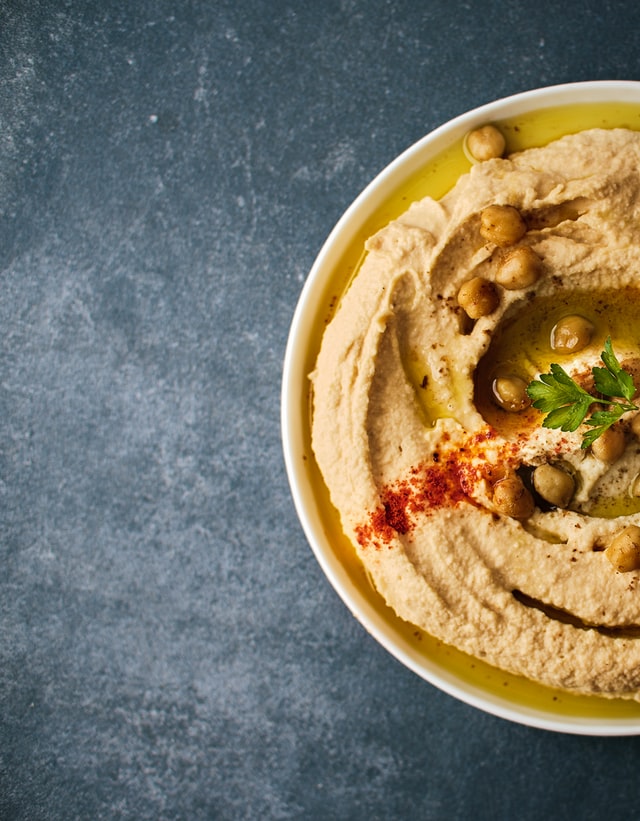