What you need to know about Solomon Islands

A new world order is coming into being in Oceania, it seems, with Solomon Islands as the epicentre of geopolitical competition between China and the US.

This nation of almost 1,000 islands (of which only 147 are inhabited) and 650,000 people, in the South Pacific, hasn’t exactly been a global player since it gained independence from Britain in the 1970s. It’s “one of the poorest countries in the region with a low level of human development”, according to the United Nations. So why the international political squall?

The reason is that China has just signed a new security agreement with Solomon Islands, which has caused much spluttering in the US, Australia and New Zealand. Under the terms of the deal, China’s navy will now be able to dock vessels roughly 1,250 miles north-east of Australia, in a region that Australia’s home affairs minister recently described as “our backyard”.

And Chinese police, rather than Australian police, will now train Solomon Islands’ security forces. It’s a sign that Canberra’s traditional influence in the South Pacific is waning – and the blowback remains intense.

A senior US official in the Pacific refused to rule out military action against Solomon Islands if it allows China to establish a military base there. And Australia’s defence minister, Peter Dutton, declared that his people should “prepare for war” to counter China’s actions in the region.

Short of actual war, there has been a verbal fusillade. Australia’s prime minister Scott Morrison warned that a Chinese base would be a “red line”. Chinese foreign ministry spokesman Wang Wenbin has accused Western powers of “deliberately exaggerating tensions” over the pact.

In the Solomon Islands parliament, Prime Minister Manasseh Sogavare denounced “those who brand us as backyard.” That’s a place, he said, “where rubbish is collected and burnt […] where we relieved ourselves.” Instead, said Sogavare, Solomon Islands demands respect “as a sovereign impartial nation with one equal vote in the United Nations”.

“There’s not that much money to be made in Solomons, with the exception of a few mines, but they’re not actually that significant,” University of Queensland professor Shahar Hameiri told openDemocracy. “Australia has spent way more money in Solomons [since independence] than you’d ever extract out of it. Historically, it has been a very dependent country.”

Hameiri should know. He studied Solomons for his doctoral thesis on state-building and the distribution and exercise of power between states. But other than academics with expertise in the Pacific region, knowledge of Solomons Islands is severely limited.

To the wider world, it is a distant signpost of historical conflict, as the site of some of the fiercest battles between US and Japanese troops in the Second World War. The Battle of Guadacanal, on an island west of Honiara, the country’s capital, proved decisive for the Allied forces.

But it’s not all in the past: the devastating legacy of war continues to make headlines because Solomon Islands still lives with – and dies from – thousands of unexploded bombs. As recently as last May, a Solomon Islander died from an exploding WWII artillery shell, prompting calls for the US to clean up “your mess”. It is telling that the Solomon Islands government website actually offers the chance to obtain a “WWII Scrap Metal Export Permit”.

But Solomon Islands is about more than just bombs. The unspooling story about the great power competition in the South Pacific archipelago is part of a much older one, of colonial conceit and arrogance. Here are three key points that help make sense of both Solomon Islands’ history and current political developments:

Even the 1893 colonisation of Solomon Islands by Britain was a gratuitous act, in response to a request from Australia, says Hameiri. The Australians “were worried about the French, who were operating at that time in the region. So even though Britain didn’t want to do it, because Australia asked them, they did. So that’s basically it, from day one. That was the approach in Australia towards these islands.”

The British declared Solomon Islands a protectorate and ruled for 85 years. Despite gaining independence in 1978, the country retains the British monarch as head of state. Though Solomon Islands is home to more than 80 different language groups, and many more different clans, it has been shoehorned (like many other formerly colonised regions) into a single unit, as a nation state.

“Unlike countries such as Samoa and Fiji, Solomon Islands never existed as anything close to an organic nation state prior to the colonial era,” Terence Wood, research fellow at Australia’s Development Policy Centre think tank, told openDemocracy. “It was created in a process of colonial map drawing.”

He adds that “the colonial era wasn’t as ruthless in Solomons as it was in many countries, but it was neglectful: the British did not do nearly enough to help the country to develop the institutions and capacity it needed for independence.”

This remains the case today. Sections of the population complain that fundamental problems with healthcare, education and unemployment remain unaddressed and that Solomon Islands has one of the lowest Human Development Index (HDI) scores in the world.

A 2013 monograph by cultural anthropologist David W. Akin, who spent several decades living in Solomons, notes the state of the protectorate within the first half-century of British rule: “By the 1930s, and especially after World War II, Solomon Islands were a British embarrassment (when London noticed them) in that direct rule of a colony with no provision for social services or means of advancement had become anachronistic.”

Australia’s role as the United States’ deputy sheriff in the Pacific region has guided its security-centred and somewhat heavy-handed approach to Solomon Islands. During the Cold War, there were worries about the Soviet Union making friends in the South Pacific by signing fishing treaties, so the US quickly established an embassy in Solomon Islands.

It’s never really about the people of Solomons. It’s about maintaining Solomons as a place that is not a threat to Australia

After 9/11 and the Bali bombings a year later, Australia scared itself with the prospect of Solomons becoming the Pacific’s first failed state, a place “where terrorists could hide and then attack Australia,” says Hameiri. Now, it’s scared of China.

“So it’s never really about […] the people of Solomons or anything like that,” according to Hameiri. “It’s not even about extracting anything from Solomons in that kind of clichéd form of colonialism. It’s about maintaining Solomons as a place that is not a threat to Australia.”

Australia has been the largest donor to Solomon Islands since the 1970s. It is also the Pacific’s largest aid donor, accounting for nearly half of the $22.7bn in aid spent on the region since 2009. Last year, Australia spent a record $1.3bn in development assistance in the South Pacific.

But to what end?

Many say that Solomon Islands remains a part of MIRAB, says Hameiri, in reference to the acronym coined in the early 1980s to describe the unenviable growth model for Pacific island countries: migration, remittances, aid and bureaucracy. Most people in Solomons still live on subsistence agriculture, he adds, and they are governed by so-called ‘Big Man politics’, which requires access to money.

Sometimes this money comes from unsustainable logging – timber is Solomon Islands’ largest export, and corruption means that licences are continually granted, regardless of dwindling resources.

Sometimes it comes from foreign support. Until Solomon Islands switched diplomatic allegiance in 2019 from Taiwan to China, political patronage in the form of so-called ‘constituency development funds’ to members of parliament came from Taiwan. “Now, Chinese money is playing that role,” says Hameiri, at roughly SBD $2m (Solomon Islands dollars, roughly US $250,000) per constituency per year. Since the switch of diplomatic recognition, China has started to repair the country’s only gold mine and to build a stadium for next year’s South Pacific Games.

Those bright and shiny things are another attraction of dealing with China, say experts. Beijing does exciting, immediate, tangible stuff, which contrasts with Australia’s dull and slow (if well-meaning) health and governance programmes. In response, Australia is rethinking its aid to focus on infrastructure.

The challenge may be to end the boomerang effect – also witnessed with US aid in Afghanistan – when the greater part of developmental spending goes right back to the donor country via fees for consultants, goods and services.

Crucially, Australia also needs to walk the talk on climate change, which is of paramount concern to Pacific islands at risk of rising sea levels. In the 2018 Pacific Islands Forum’s Boe Declaration, Australia concurred that climate change was “the single greatest threat to the livelihoods, security and wellbeing of the peoples of the Pacific.” But Canberra’s carbon reduction goals seemed to indicate a low level of real commitment to the task.

That this matters is clear from prominent Solomon Islands journalist Dorothy Wickham’s social media post in the midst of the uproar over competition between China and the US: “As we talk the big things, lets [sic] also look at the small things,” she wrote. “Managing our sea resources is of serious concern for Solomon Islanders. Food security is [an] important issue for Pacific Islands as our populations grow, sea level rising. How do we look after our people? Will our children tomorrow have the same food supply as we do now?”

Prime Minister Sogavare has described the backlash to his country’s security deal with China as “very insulting”. Pointing out that the “security agreement with Australia remains in place and intact,” he said: “It is clear that we need to diversify the country’s relationship with other partners, and what is wrong with that? We find it very insulting to be branded as unfit to manage our sovereign affairs, or [to] have other motives in pursuing our national interests.”

Experts say it would be wrong to think Solomon Islands simply wants to switch paymasters. Nor does it seek conflict, or to be centre stage in an argument between the world’s leading powers. But it does want dignity.

According to Geoffrey White, University of Hawaii professor emeritus, unfolding events show “the inherently autonomous and pragmatic perspective of Indigenous peoples who have long histories of interacting with global powers who often have little understanding of local perspectives”.

White, whose research career began in Solomon Islands, told openDemocracy that his studies of the country’s Second World War history illustrated the gap between Western categorisation and local reality. “Allied powers eagerly represented the loyalty of Islanders in assisting with the war with Japan when, in fact, on the ground, people throughout the archipelago were making all sorts of complex decisions, with many coming to the postwar conclusion that ‘the war was not our war’. Yet every time the war is commemorated in Solomons, it is the unflinching loyalty and alignment of Islanders with Allied powers that is celebrated. […] It is only part of the story, with other parts conveniently forgotten.”

Hameiri agrees that it all boils down to respect. Solomon Islanders, he says, must think, we have lived for so long with Australians and “they’ve given us a lot of money, but they don’t actually respect us very much, and we want a little bit more autonomy.” 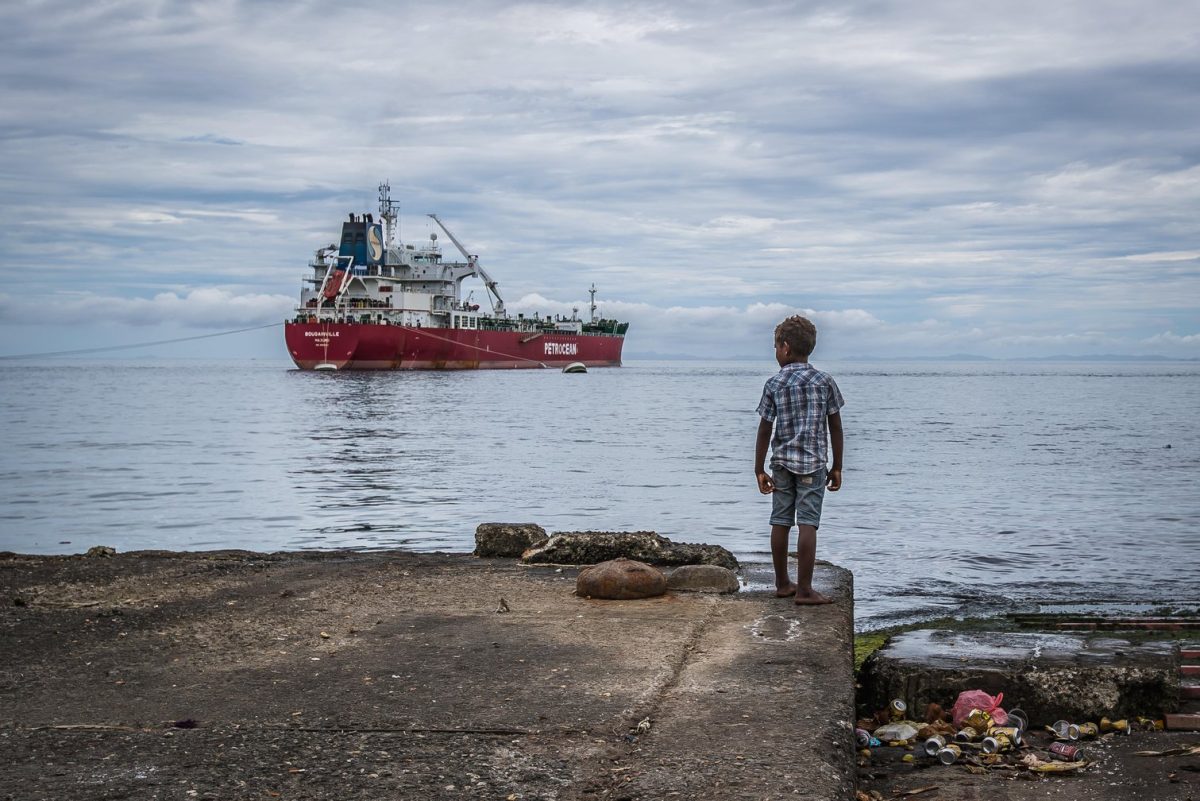