Time running out to save Sri Lanka from economic collapse

Sri Lanka is in a state of chaos. Faced with the worst economic crisis of its 74 years of independence, the country has been roiled by days of violent unrest — leading the government to the brink of collapse.

For months, nationwide protests have taken place over soaring food prices, severe shortages of everyday essentials, weeks of power cuts lasting up to ten hours a day, and crippling petrol and diesel costs, which are up 92% and 76% respectively since January.

A national emergency remains in force, the army is enforcing a nationwide curfew and threatening to shoot looters on sight and some Western countries are issuing advisories to warn their citizens against non-essential travel to Sri Lanka.

Its growing notoriety — as a failing state and an unstable no-go area — is a bitter blow for the tear drop-shaped island nation, which once counted tourism as its third-largest foreign-exchange earner and was not too long ago hailed by the World Bank as South Asia’s “development success story”.

Here’s your guide to what’s going on.

President Gotabaya Rajapaksa’s government is struggling to remain in office as he attempts to cobble together a national unity administration. This would replace the 26-member cabinet, whose members resigned in unison last month bar the president and his elder brother, the prime minister, Mahinda Rajapaksa.

The situation is volatile. Mahinda, who hung on until Monday, when he also resigned, has had to be evacuated by the army, after protesters tried to storm his official residence in the capital, Colombo. He is currently sheltering at a naval base in the north-eastern city of Trincomalee.

On 12 May, Ranil Wickremesinghe was sworn in as Sri Lanka’s prime minister for the sixth time, but it’s not clear if cabinet formation will be speedy and smooth. The lack of a new cabinet is taking its toll on Sri Lanka’s people and its prospects. On 11 May, the head of Sri Lanka’s central bank, Nandalal Weerasinghe, said the country has just 48 hours to save itself, lest “the economy will completely collapse”.

Meanwhile, angry protesters chant “ Go Gota, go “, while the International Monetary Fund (IMF) — with which the government is urgently negotiating a bailout — has said talks for a loan can advance only once a new cabinet is in place.

The IMF also expressed concern over “rising social tensions and violence”, according to a statement shared with local media.

A mounting debt crisis has left Sri Lanka unable to refinance foreign debt totalling more than $50bn. And with foreign currency reserves as low as $50m, the country is unable to import food, medicine and fuel.

Its 22 million people have suffered weeks of severe shortages of everyday essentials. Even the most basic food has become unaffordable. Lentils, for instance, rose from 168 Sri Lankan rupees (37 pence) per kilo in October to 500 rupees (£1.11) in April. Meanwhile soaring fuel costs are forcing public transport and private vehicles off the roads and leaving farmers unable to run tractors or start their rice paddy crops, despite it being planting season.

A desperate government has sought bailouts from India and China and even poorer Bangladesh.

But how did Sri Lanka get here? It was the first South Asian country to embrace market liberalisation way back in 1977 and was often compared to Singapore, says P. Jayaram, a visiting professor at Amrita University in Coimbatore, India, who reported from Colombo in the 1980s and 1990s.

Barely a decade ago, a report for the research-focused International Growth Centre was hailing Sri Lanka’s 7% growth rate and its “substantial reduction in poverty”. As recently as 2018, Sri Lanka’s per capita GDP was more than $4,000 (by 2020 this had fallen to $3,680). According to UNESCO, an astonishing 92.5% of Sri Lankans are educated, with non-profit Borgen Project declaring the country’s relatively new education system “ has shocked the world with its success”. Sri Lanka’s free and universal healthcare was celebrated as “ a success story in South Asia”.

On 16 May 2009, Mahinda Rajapaksa, then the president, declared victory in the nearly three-decade civil war against Tamil Tiger rebels. There was dancing on the streets of Colombo and a stream of congratulatory messages poured in from world leaders for this stunning defeat of ‘terrorism’.

Sri Lanka seemed poised to reap the harvest of peace and prosperity. But the decisions made after the end of the war put the country on a quite different, perilous path.

“Sri Lanka made a series of flawed choices after the end of the civil war,” Sumit Ganguly, a professor of political science at Indiana University, told openDemocracy.

“Amongst other matters, it went on a borrowing spree and it cut taxes. The debts came due and the revenue losses undermined public finances.”

Sri Lanka was Asia’s largest high-yield bond issuer, borrowing heavily in the years following the war for several ambitious infrastructure projects, such as South Asia’s tallest self-supported tower and wide highways in the hinterland. Critics call these projects “the Rajapaksa white elephants”. The pile of debts continued to grow, with roughly a third owed to international bondholders and China and India as other large creditors.

Mahinda was in charge of the country from 2005 until 2015; his thumping election victory in 2010 leading political analysts to label him “a man with a Midas touch”. But that seemed not to extend to the country’s finances, with Mahinda taking Chinese loans to build the expensive Hambantota port in his southern home district.

This controversial relationship with China went back a long way, as Ganguly wrote in a 2018 paper. Mahinda’s final military onslaught against the Tamil rebels, Ganguly noted, “found significant support, especially in the form of substantial amounts of military equipment, including six F7 fighter jets, from the People’s Republic of China.

“The PRC also provided millions of dollars’ worth of other military equipment and about $1bn in overall assistance.”

The Hambantota project followed on from that — but it hasn’t ended well. In 2017, the port was leased to Beijing on a 99-year debt-for-equity swap, after Sri Lanka failed to pay off the loan. Critics say Mahinda caused Sri Lanka to fall into the “Chinese debt trap”.

The man with a Midas touch lost the 2015 election, but with brother Gotabaya chalking up an emphatic win in 2019, the Rajapaksa family was back in power. At the time, Sri Lanka’s economic situation was fair — it had foreign reserves of some $7.5bn and a budget surplus — there seemed a chance it could turn the corner on the bad deals of the past.

But Gotabaya put in place sweeping tax cuts, in what some Sri Lankan commentators call “voodoo economics”. With value-added tax nearly halved to 8% and seven other taxes abolished, government revenue fell. Ganguly indicates that it changed Sri Lanka’s progressive, poverty-cutting arc. “Economic disparities certainly had widened with the tax cuts as the benefits mostly accrued to the wealthy,” he told openDemocracy.

The pandemic didn’t help because “there was a dramatic drop in tourism… and the country lost significant remittances from the Middle East,” Ganguly added. “To compound matters, with the exchequer drained an import-dependent economy saw soaring inflation.”

In April 2021, the Rajapaksa government announced a bold and aspirational transition to organic farming. Chemical fertilisers were banned and their import halted. Virtually overnight, farmers were left to get on with farming in an organic way.

“There was no proper plan, no training or education,” Vimukthi de Silva, an organic farmer in Rajanganaya, later told The Guardian. Yields of rice, the country’s staple food, dropped precipitously, as did formerly plentiful banana and tea crops. Vegetables became five times as expensive as before the ban.

The cash-strapped government slashed funding for school meals. A food crisis loomed. Donations of Chinese rice were supplemented by high-priced purchases from Myanmar. Sri Lanka’s failed organics experiment became a salutary story in South Asia for how not to do it.

The president promised, late on 11 May, that he would form a new government within a week. But this may not be quick enough. The situation remains fluid and the only certainty is flux.

Writing in The Guardian in 2009, celebrated British-Sri Lankan writer Romesh Gunesekera described his country of origin in lyrical terms. Sri Lanka, he wrote, “is an island that everyone loves at some level inside themselves. A very special island that travellers, from Sinbad to Marco Polo, dreamed about.

“A place where the contours of the land itself forms a kind of sinewy poetry.”

But Gunesekera’s article was headlined: ‘A long, slow descent into hell’. It may have been prescient, albeit unintentionally, about a country whose leaders’ aspirations catastrophically exceeded their ability to sustainably deliver. 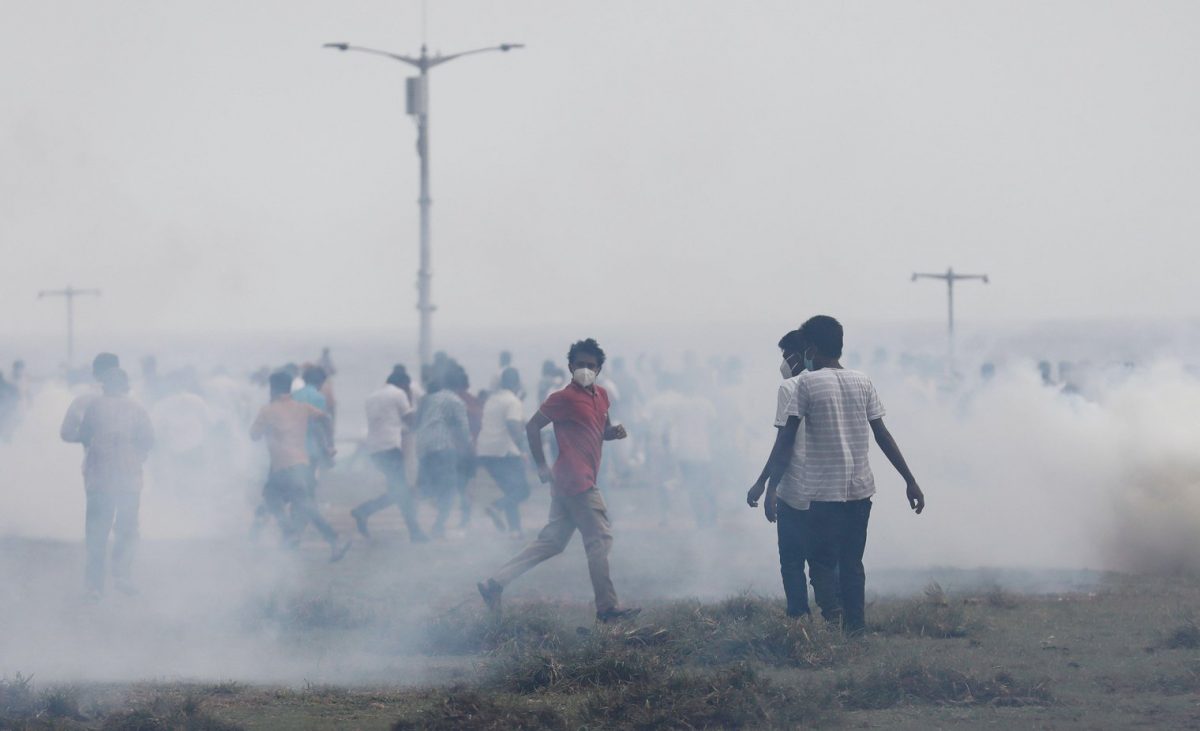