Fair-skinned or not, colonisation is a mentality

Well, these are legitimate concerns. Of course, Ukraine will want to rebuild itself, as it sees fit, using its own professionals.

That said, it’s confusing that in the same breath as he challenged the alleged attempt to colonise his country,  Mr Drozdov asked for “financial support”.

It’s worth thinking about Oleg Drozdov’s horror at the dependency of the colonised alongside his bold request for financial help.

This would go towards continuing the Kharkiv School of Architecture’s academic programme. The school, Ukraine’s first such private institution, was founded by Mr Drozdov in 2017. It’s mind-boggling that anyone, especially someone concerned about intellectual and professional colonisation, should think foreign universities or perhaps even foreign governments should pay for a private commercial venture.

But isn’t that part of how many think about people and governments in the “rich world”, in the West? That they can afford to pay. That they should pay…considering they have colonised the world and rendered whole cultures and peoples mute, invisible, broken and unviable.

There is absolutely no reason to defend the West’s track record. But there is reason to ask why someone who wants to resist colonisation should seek financial dependency.

For, it’s worth thinking about Mr Drozdov’s horror at the dependency of the colonised alongside his bold request for financial help.

To spread one’s hand out before another – particularly, a rich entity – suggests that you aren’t opposed to a relationship of dependency, you just want it on your terms. In fact, some might even say that it validates the old order, when there was a so-called white man’s burden, when white western men were duty-bound to “civilise” and “teach” and look after the rest of us. This was on account of their supposed higher status, ability and achievement.

Ukrainians are fair-skinned but colonisation is a mentality.

And decolonisation too is about mindset.

Colonisation and decolonisation in the context of Kharkiv’s architects 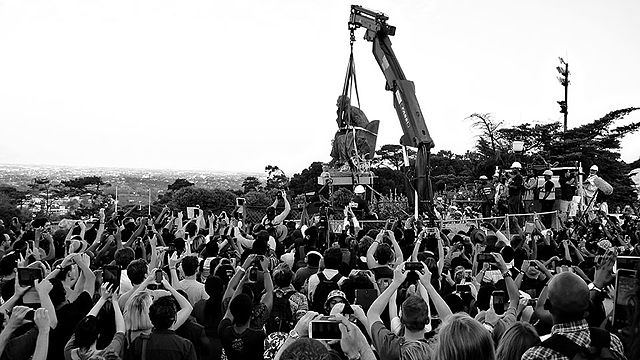