A (wo)man of the people?

When Kemi Badenoch appears on the Conservative Party stage of aspiring prime ministers, she seems to present herself as a woman of the people.

Someone who will let people know the pros and cons of every decision she would make as Britain’s leader.

There are flashes of a man named Chief Manga,  cabinet minister in an unnamed country in Africa in the last century. For all that the Chief is only a fictional character in Chinua Achebe’s 1966 novel ‘A Man of the People’, he is meant to be that familiar being: “a born politician; he could get away with almost anything he said or did.”

Ms Badenoch seems like a born politician, with gumption and daring in spades. Consider the culture wars that she is waging from the right of the Conservative Party: She has challenged the notion of widespread institutional racism in the UK, inserted herself into the debate on gender-neutral toilets (against) and spoken about “jobs which literally didn’t exist a decade ago, like staff wellbeing co-ordinators in the public sector” (against).  She has pronounced on right wing racial prejudice (there is none, she says, having told LBC that she only ever experienced prejudice from left wingers). As Achebe wrote, “We had all accepted things from white skins that none of us would have brooked from our own people.”

However, what Ms Badenoch has never really examined forensically and publicly is the basis of her presumption. Why does she have the cheek to think she should be Britain’s leader in 2022? At 42, with a skeletal portfolio of governmental experience, Ms Badenoch presents as no more than a startling study in self-confidence. (As of the morning of July 19, she was fourth in the race to be Conservative Party leader – and thereby, UK prime minister – having reached the third round of the ballot by members of parliament and seen off some relative big-hitters.)

One might well be reminded of Chief Nanga, Achebe’s charming charlatan. As Odili, the young and idealistic, if flawed narrator says of the Chief, “Somehow I found myself admiring the man for his lack of modesty. For what is modesty but inverted pride? We all think we are first-class people. Modesty forbids us from saying so ourselves though, presumably, not from wanting to hear it from others. Perhaps it was their impatience with this kind of hypocrisy that made men like Nanga successful politicians while starry-eyed idealists strove vaingloriously to bring into politics niceties and delicate refinements that belonged elsewhere.”

Achebe is clear about the successes likely to be racked up by figures such as the Chief. “And as long as men are swayed by their hearts and stomachs and not their heads the Chief Nangas of the world will continue to get away with anything. He had that rare gift of making people feel – even while he was saying harsh things to them – that there was not a drop of ill will in his entire frame. I remember the day he was telling his ministerial colleague over the telephone in my presence that he distrusted our young university people and that he would rather work with a European. I knew I was hearing terrible things but somehow I couldn’t bring myself to take the man seriously. He had been so open and kind to me and not in the least distrustful. The greatest criticism a man like him seemed capable of evoking in our country was an indulgent: ‘Make you no min’ am.” 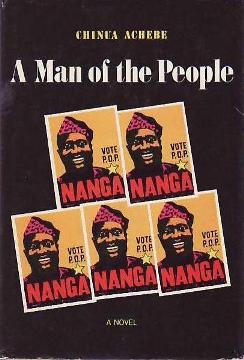