The kindness of our friends in the Indian capital has meant we have been treated to excellent meals for the past two nights. One was at a famous Chinese restaurant in Delhi, which prides itself on the authenticity of its food and those who cook it. The other was at a pan-Asian restaurant, which is also considered a superb representative of its style of cuisine.

The food and the establishments at which it was served were top of the line and the company was even better.

But I must confess, I continued to hunger for Indian-Chinese noodles – the street food that has no particular pedigree other than an Indian style of cooking married to a long winding strip of pasta that was invented in China.

It was only today that I managed to get a bag of Indian-Chinese noodles, buying it straight from the giant wok-style karahi (an Indian cooking pot that resembles a wok) from a street stall for Rs 70 (74 pence, in British money). It was hot – temperature-wise as well as fiery with chillies – and delicious. When I asked the cook if he would throw a little serving of chilli sauce in with the takeaway bag of noodles, he assured me it had enough “garlic sauce”. Guessing that he meant garlic-flavoured chilli sauce, I took the bag away and dug in with my plastic fork. It sure had enough “garlic sauce”.

Indian-Chinese noodles are sometimes called “Chinjabi”, an omnibus term for Punjabi-Chinese cooking. They have an inimitable taste –faintly garlicky, fairly chilli hot, sour and salty, with just the right mix of cheap vegetables wrapped around a pasta of appropriate thickness (somewhere between egg noodle and vermicelli).

Vir Sanghi, who’s a very fine Indian food writer, describes it as Punjabi-Chinese or Sino-Ludhianvi cuisine. He recently recounted how it all began in the early 1970s, with the Mumbai Taj Mahal Hotel’s marketing head Camellia Panjabi partaking of Sichuan cuisine in Hong Kong and realising it was spicy enough to succeed in India. The result was the Golden Dragon restaurant at the Mumbai Taj in 1973. It was staffed by the manager and two chefs of the same Hong Kong restaurant where Ms Panjabi had eaten her first Sichuan meal and Mr Sanghvi says, the spicy fare offered at the Golden Dragon “changed Chinese food in India forever”.

He notes that, “Till then Indians had only known the cuisine that the Calcutta Chinese cooked at restaurants (but not at their own homes) in imitation of the Cantonese-influenced bland American Chinese menu. But this was the real thing from the heart of China. It was hot. And it was delicious.”

Five years after the Golden Dragon, came The House of Ming, another Taj restaurant, this time in Delhi, whose success, says Mr Sanghvi, “led directly to the creation of Punjabi-Chinese, or Sino-Ludhianvi cuisine.”

For, though The House of Ming served proper Chinese food (albeit the hotter Sichuan-style that Indians hadn’t yet known but now loved) other Indian restaurateurs had no compunctions about whipping up their own indigenous pseudo-Chinese versions.

That’s what I ate off the streets of Delhi today, the Chinjabi chow mein of my youth. 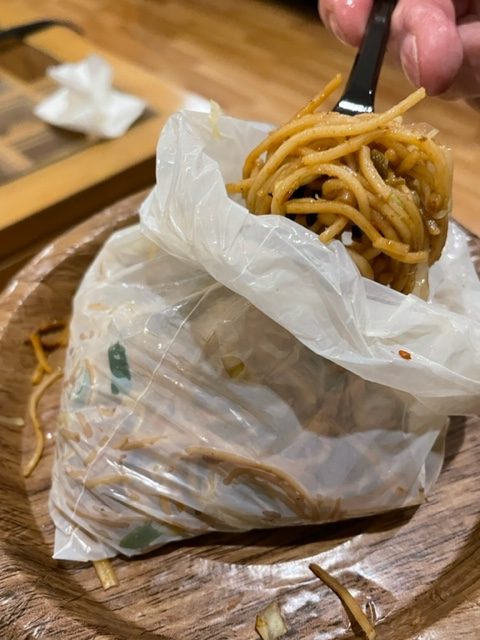