I feel there is a need for a codicil to my earlier blog on public art at a particular airport in Hindu nationalist BJP-ruled India.

Flying into Dehradun, a town in the foothills of the Himalayas, I observed that its airport gave the impression of syncretism. It had a massive mural referencing Hindu gods across the length of one wall of the terminal, while outside, thick pillars bore the six-syllabled Sanskrit mantra “Oṃ maṇi padme hūṃ”, which is associated with Tibetan Buddhism. In the blog, I wrote: “The sense conveyed by the public art in Dehradun airport is supremely confident and, it has to be said, inclusive. That may not be exactly the reality of BJP-ruled India but there you go.”

The above observation needs some explanation, especially as many in India and abroad increasingly see the country as a “republic of hate”. In India, extremist elements in the Hindu community no longer languish on the ideological fringes. Instead, they have a voice, a presence and a discernible impact, with their message of hatred of the ‘other’ firmly within the mainstream. Casual  interactions – posh dinner parties, gatherings of friends, the literati, glitterati, the salaried middle class – can throw up statements of hate towards the whole community of Muslims, 200 million of them. Passionate arguments are had, both sides arguing passionately held positions.

When Rohinton Fali Nariman, a retired Indian Supreme Court judge, lamented in a public lecture that hate speech is not just permitted in the new India but actually encouraged by the “higher echelons of the ruling party”, he was referring to a specific event in late January. Monks at a Hindu temple in Haridwar, one of India’s holiest cities, had called for a genocidal campaign to “kill two million of them” (Muslims) and urged an ethnic cleansing similar to the one against Rohingya Muslims in Myanmar.

The judge was talking about specifics but his comments are equally applicable to the general. Extremists are stirring up communal hatred in India, in a push to reshape the constitutionally protected secular republic into a Hindu state.

But in an attempt to give the impression of inclusiveness, the BJP says Buddhists and Sikhs are in the same big tent as Hindus. (On April 11, 2019, then BJP president Amit Shah tweeted: “We will ensure implementation of NRC [National Register of Citizens] in the entire country. We will remove every single infiltrator from the country, except Buddha, Hindus and Sikhs.”)

The BJP is pushing the Buddha circuit, both for tourism and propaganda purposes. As an astute observer noted, Kushinagar, a one-cow town in north-eastern Uttar Pradesh, which didn’t even have a railway station, got an international airport in November 2021. That’s solely because Kushinagar is thought to be the place where the Buddha attained Mahaparinirvana or the great transcendence of suffering.

That’s the context of the “Oṃ maṇi padme hūṃ” pillars outside Dehradun Airport. 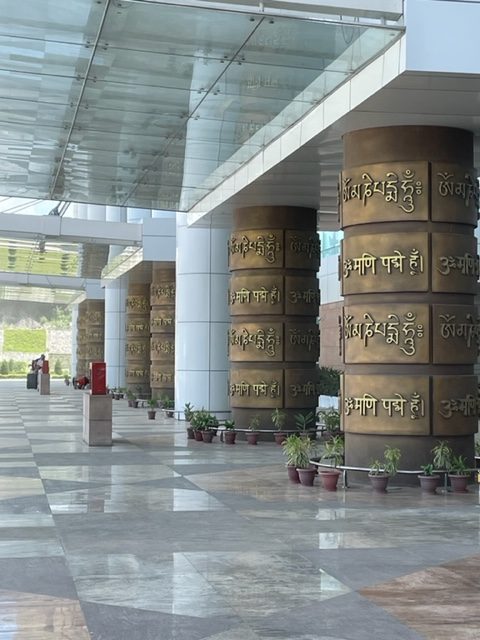