India Has a Woman Problem

And there’s no denying it anymore.

A young woman is savagely gang-raped and beaten one December evening on a moving bus in New Delhi. Hordes of protesters gather in India’s capital and demand that the six perpetrators be hanged or at least castrated. 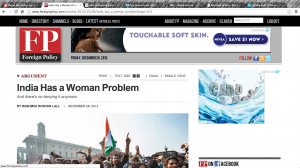 India’s electronic media offers continuous coverage of the sort once reserved for important cricket matches. The woman, a medical student, suffers infections in her lungs and abdomen and an injury to the brain, and is flown to a hospital in Singapore, where she later dies. Delhi’s police chief puts forth the incredible opinion that men in his city are no safer than women because they routinely suffer at the hands of pickpockets. Meanwhile, Abhijit Mukherjee, a minor politician who happens to be the son of India’s president, derides the protesters as “highly dented and painted” women pretending to be students. It’s an Indianism for an old car with extensive bodywork — women, in other words, provoke sexual violence by insufficiently demure clothes and conduct.

How is this happening in India? To much of the world, the debate seems inexplicable in a country where economic change is coming — as is Walmart — and Western clothes, mores, and wine bars are increasingly evident in big cities. Although India’s GDP per capita in 2011 was only $3,700, it’s one of the fastest growing major economies in the world. In 2010, a visiting U.S. President Barack Obama told India it wasn’t a rising power but had already “risen.” Until July, the president of India was a woman. The current leader of the country’s governing Congress Party is a woman, as is the speaker of the lower house of parliament and three chief ministers (the equivalent of a state governor in the United States). Women have a vigorous presence in the urban Indian workplace, and unlike their sisters in nearby Afghanistan, they are a familiar sight on the roads, driving cars and scooters. But make no mistake: India’s woman problem runs deep.

Indeed, the Delhi gang rape and its fallout highlight India’s inherent and disturbing contradictions. In June, a survey of the world’s 20 biggest economies by TrustLaw, a legal news service run by Thomson Reuters, ranked India as the worst country to be female, citing widespread child marriage, murders for insufficient dowry, and domestic slavery — worse even than Saudi Arabia, where women won the vote only in 2011, are treated as legal minors whatever their age, and are still banned from driving.

Yet sex remains a taboo topic for most Indians. A powerful conservative morality limits acknowledgement to innuendo and suggestive word pictures created by Hindi film songs. A 2011 pollby India Today, the country’s leading news magazine, found a quarter of respondents offering no objection to sex before marriage, so long as it was not happening in their family.

This makes for a debilitating sexual repressiveness, which women’s organizations believe accounts for the high rate of sexual violence. A 2011 survey of gender equality by the Washington-headquartered International Centre for Research on Women revealed that one in four Indian men have committed sexual violence at some point in their lives and one in five has forced his partner to have sex with him, far higher rates than the five other countries surveyed. More than 65 percent of Indian men surveyed believe that women sometimes deserved to be beaten, and that to keep the family together, women should tolerate violence. “In India, the age-old code of conduct has been to keep men and women separate. So women are only viewed as sex objects,” Vibhuti Patel, a women’s rights activist, told theTimes of India.

The Indians who argue that they elected a woman as head of government back in the 1960s (something the United States has yet to do), and that modern Indian women are free to work, need to accept they live in an intensely patriarchal society. This reflexive conservatism runs deep, despite the changes wrought by the Internet, mobile telephony, and the commercial forces of the 21st century. Just listen to India’s elected politicians: In October, a rash of nearly 20 rapes in the small north Indian state of Haryana led the female chief minister of West Bengal, Mamata Banerjee, to blame the increasing interaction between men and women. “It’s like an open market with open options,” she complained. Another Haryana politician suggested, along the lines of the Republican Party’s Todd “legitimate rape” Akin, that he didn’t know what the fuss was about because 90 percent of rapes are consensual. Meanwhile, a council of village elders advocated lowering the marriageable age for women from 18 to 15 or 16 to decrease rape. It was left to four U.N. agencies to respond with a letter to government officials stating that “child marriage is not a solution to protecting girls from sexual crimes including rape” and that 40 percent of the world’s child marriages already happen in India.

Against such long odds, Delhi’s protests of the moment may do little to make it safer to be a woman in India. That would require a sexual revolution. And that may be a long time coming.

Rashmee Roshan Lall, the former editor of The Sunday Times of India, is now a freelance writer based in the United States.