It says something about Aung San Suu Kyi’s restraint and self-effacement that she personally picked just one of the eight musical tracks she was allowed to choose for the BBC Radio 4 programme ‘Desert Island Discs’. In a sense then, this was not really a hypothetical playlist from Suu Kyi’s hypothetical iPod. (Does she have an iPod? Probably. Everyone gets one at some point in their life – for a birthday present.)

Anyway, so Daw Suu chose Pachelbel’s Canon for herself; everything else was for someone else or picked by someone else – Imagine; Here comes the sun; The green green grass of home (which she’d never even heard before commanding it be played); Dvorak’s Largo from Symphony no. 9;  Mozart’s Magic Flute and two Burmese songs, Ko Mya Gyi and Traditional graceful flower. 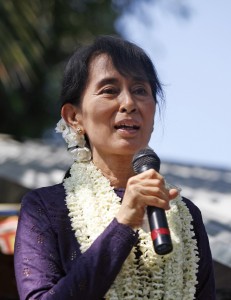 But Pachelbel’s Canon seemed to symbolize Suu Kyi – mellow, meditative, modest about big numbers (faced down); great personal sacrifices (she made); controversial support for the Burmese Army; common sense foreign policy objectives, and her own estimation of her character (“soft at the core”; a cowardly child; a bad pianist; don’t have a musical bent; immensely adaptable; a perfectionist).

Arguably the high point of being allowed into Daw Suu’s drawing room was to hear her explain how she chose to stay in junta-ruled Burma rather than with her husband Michael Aris and two young sons, Alexander and Kim, in cosy domesticity in England. “I’m not terribly fond of melodrama. When people have chosen a certain path, they should walk it with satisfaction and not try to make it appear as a tremendous sacrifice.”

A suitably restrained rebuke to those who must insist she is a heroine. Like a good Buddhist, she simply chose her path and stuck to it.