Eye-catching? Haiti’s tourism minister just as much as her plans 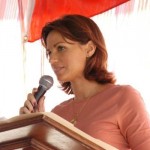 Talk to Haiti’s tourism minister, Stephanie B Villedrouin, and it’s hard not to consider one of the first questions that might usefully be asked: Are you willing to see yourself as an advertisement for nou tres bel peyi a (kreyol for your beautiful country)?

Impertinent – and sexist – though it may sound (even from me, a woman), Ms Villedrouin’s rise to the role of tourism minister is arguably one of the most eye-catching developments in Haiti’s barely-there tourism industry right now. Her perfect form and youthful charm offset the gross problems of her mammoth task – selling an impoverished, politically tumultuous, tragedy-scarred country as a destination for foreigners to frolic even as more than 300,000 Haitians go to bed in plastic-covered lean-tos every night.

Se possible? Paul Clammer, whose second tourist guide book to Haiti has just been published, seems to think it is. He says he wrote the new book “because I wanted to subvert people’s expectations of Haiti. It is an endlessly fascinating and beautiful place…”

He’s right, of course. Even I, just three weeks old in this country, wonder at Haiti’s beauty outside of dusty, chaotic, uncouth Port au Prince. Leave the Haitian capital and it is all sea-fringed and blue and turquoise, with views that might have been transposed straight from the Cote d’ Azur. Leave Port au Prince and it is easy to understand why Haiti was seen as such a divine, delightfully naughty tourist destination in the late 1940s and 50s. It is easy to understand why holidaymakers flocked here once again in the 1970s and why the ‘separately together’ Clintons – Bill and Hillary – honeymooned here. But then, 1986 happened, a dictator fell, leaving the country exactly 27 years ago today, and Haiti fell into the habit of political coups and prolonged periods of anarchy.  Not much to write home about. Or to leave home for. Ms Villedrouin has her work cut out for her. She will need to marshal all her reserves and summon up all her charms to turn back the clock – or at least reset it enough for the world’s travellers to give Haiti a fair chance at being winsome again.