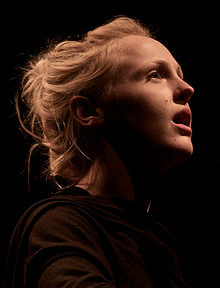 Listen to the tracks on Laura Marling’s new album ‘Once I was an Eagle’ and it is as if a perfect English summer’s day is pouring from the speakers.  Or perhaps like the song she’s written for the Royal Shakespeare Company’s ‘As you like It’: “Under a sweet bird’s throat, who could hope for a sweeter note?”

Watch her pale face (artfully made up to look completely natural? Or completely bare of powder and the artifice that comes out of various pots) with what looks like warts and she seems to be barely here. Her golden hair swings gently as she dreamily sings to herself, seemingly addressing her listeners from a different world.

The Guardian describes ‘Once I was an Eagle’ as “her best and most coherent (album) to date, a 16-track, one-plot blockbuster in which Marling explores the settlements and compromises and (finally) rewards of new love.” I don’t know about that, not being a music critic or sufficiently music-literate to pronounce. But as a lay listener, having heard her in some earlier singing avataars (with Noah and the Whale etc) the new album is simply magical, especially the track titled ‘Once’.

Marling has now relocated to Los Angeles, reports The Guardian. She seems to like it well enough, described “Americans (as) just a lot more poetic. I don’t know whether I’ve sort of fallen out of love with English charm, the reservedness of it…”

But anyone who likes Marling, would yearn to be in England right now, watching – and listening to – ‘As you like It’.

So it is with me. Oh to be in England.