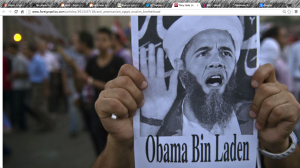 As John Kerry flags off new Middle East negotiations about negotiations, one has to wonder why he bothers (other than for form’s sake) considering the growing popularity of anti-Americanism.

That’s an interesting idea – the popularity of a negative opinion. One might just as well have said backlash, except that it isn’t. It appears to be deeper, wider, more corrosive. Scornful, short on facts and big on atmosphere.

Foreign Policy magazine used the word “popular” to describe the prevailing sentiment in Egypt but many might wager the feeling is shared by large swathes of the Middle East, other parts of the developing world and even the most unlikely bits of western Europe.

Just the other day, I heard British Conservative party politician David Davis telling the BBC’s Gavin Esler rather sniffily that it wasn’t up to the US to “hoover up” British citizen’s private information. He didn’t say ‘information apartheid’ but suggested it existed, with American citizens enjoying every right and non-US citizens having none. “Whole blocks of information from British citizens are made available to the Americans…You and I might as well be North Koreans as far as American law is concerned, we have no rights…no protection of the law…,” he said extravagantly.

Mr Davis, no Europhile added, in what could only have been extreme agony, “I think the European Union might be the only answer – in dealing with the Americans – they’re the only  ones big enough… they’ll be cross enough to say I’m sorry but you have to think a bit more about people who’re not citizens of the US and what their rights are…”

Mr Davis is a known civil liberties campaigner but his tone suggested a marked lack of love for the US.

If that’s the way a British Conservative politician sounds, how much more extreme can it be in Egypt?

Very, it seems. The streets are reportedly overflowing with flyers, banners, posters and graffiti denouncing President Obama and his ambassador in Cairo (Anne Patterson “is an evil lady”, reads one).

Across the political, ideological and social spectrum, Egyptians are riled by the US. As has often been pointed out, back in May 2008, Gallup found that just four per cent of Egyptians believed the US would let the region forge its own political destiny and a mere six per cent approved of the leadership in Washington. Mr Obama’s June 2009 Cairo speech sent US approval rates soaring to 37 per cent but that was an-all-too brief moment of sunshine. Within a year, the numbers fell lower than even for George W. Bush.

I suppose there’s something comforting about the man they’re using to vilify Mr Obama today. At least it demonstrates they hold no brief for him.

But equally,  Obama bin Laden underlines the depth of unspecified and incohate rage.