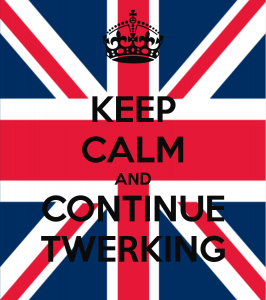 Oxford Dictionaries Online say they’re adding “twerk” to its cache of words. I wouldn’t have known exactly what they meant had it not been for Miley Cyrus. The former child star’s raunchy stage show at Sunday’s MTV awards had lots of twerking. Apparently.

It’s taken Ms Cyrus to introduce lots of new people (moi being a case in point) to twerking. The word, that is. When I first heard about the shock and horror that followed Ms Cyrus’s unabashed twerking, I wondered what she’d been doing.

A combination of tweeting and jerking? (Though why she’d want to do that, I couldn’t imagine.)

Or perhaps she’d been tweeting and working? (That made more sense. Most journalists do this all the time.)

Or might she have been twisting and jerking? (This sounded improbable too, except that she was putting on a performance.)

I rather inclined to the last combo-word, till I read The Guardian’s Passnotes, which is tagged as “a humorous Q&A about a newsissue of the day”.

It described Ms Cyrus’s twerking as “a dance move in which a lady bends over and presses a hidden button to activate a series of vibrations in her motorised buttocks.”

But the twerking it described sounded far too extreme for a television show that wasn’t X-rated. So I turned to Wikipedia, too often the world’s first and last information resource.

It was a goldmine of data about what appeared to be a 20-year-old phenomenon even though it was unable to conclusively settle how twerking became a word. It suggested it may or may not be a contraction of footwork or a cross between twist and jerk.

But it was more helpful about how twerking first burst (or rather wiggled) on to the world stage. It appears to have emerged from the New Orleans bounce scene (a particularly energetic kind of hip hop) and DJ Jubilee is believed to be the first person known to have asked his audience to “twerk” to a popular track.

Wouldn’t that make him the father of twerking? Or at least its foster parent? That sounds more appropriate in the age of blended families with gender-neutral responsibilities, which may or may not involve policing one’s offspring’s propensity to twerk.