Flan of life: In praise of caramel custard 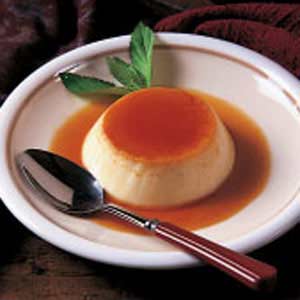 They call it flan in the US and Spanish-speaking world. Banh, Caramen and Kem in parts of east Asia. In England and India, it’s plain old caramel custard. They like it in Japan. The Philippines. Haiti. The Dominican Republic. Everywhere really.

I like to make mine in a pressure cooker, or a Presto as they call it in Haitian kreyol.

And I use ‘superlight’ milk and no cream so it’s a pudding that’s amazingly guilt-free. That said, I’d probably fail the Barefoot Contessa test because didn’t Ina Garten say “Creme Brulee is the ultimate ‘guy’ dessert. Make it and he’ll follow you anywhere”? Please note, she didn’t say Crème caramel, just Crème brulee.

Anyway, we made one at the weekend to take to a dinner party.

It went down a treat, a reminder that pudding doesn’t have to be elaborate – even the simplest can delight the soul.

So long as it’s well made, I guess.