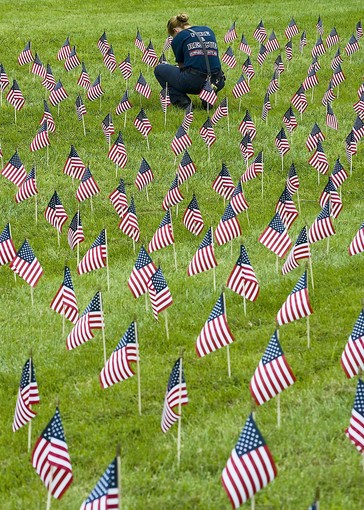 In that grim space of time, five-year-old Americans are approaching the end of adolescence, a generation has been scarred by war and nearly 50,000 Afghans are dead. As are at least 1,700,000 Iraqis for a crime they did not commit.

It is probably always going to be hard for America to forget 9/11. J.B. Priestley correctly diagnosed the airy pretence that dying is rather like strolling into the next room as unconvincing, for “death, like birth, must be a tremendous event.”

But does it have to be a collective wailing and keening? Why not replicate, all over the States, Washington, D.C.’s annual 9/11 Unity Walk, which draws hundreds of people of different faiths together to exchange shared aspects of faith rather than the bits that divide them?

They did this on Sunday, September 8, and as The Washington Post reported, “A microphone reverberated with the deep and sonorous Muslim call to prayer shortly before 2 p.m. Sunday. ‘Allaaaaaah — uh — Akbar!’ An entire congregation bowed its head in prayer — a Jewish synagogue filled with Muslims, Jews, Christians, Buddhists, Sikhs, Hare Krishnas, Mormons, Pentecostals, Greek Orthodox, Baha’i and others. Just think, one woman sitting in the mauve seats at the Washington Hebrew Congregation marveled, in another country, they all could be shot for such blasphemy.”

Precisely. That is the uniqueness of America and this is why it must comfort itself with the knowledge that while it may never forget, it must allow itself  to, one day, remember less fiercely. Thank God.