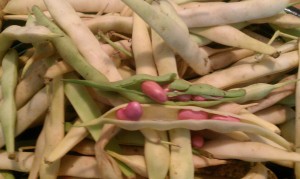 Haiti’s pwa wouj vet is incredible. I will always be indebted to my kreyol teacher for introducing me to the fresh red bean.

He said he “remen sa a ak achte yon nan katiye m (likes them and buys them in my neighbourhood).”

And then he told me the funniest story ever.

Apparently Haitians use the phrase “kale pwa” (shelling beans) to mean the act of gossip  (as well as the actual act of shelling beans).

When he tried to buy pwa wouj vet last weekend, he said, the vendor didn’t have enough but offered to shell some more fast enough for him to add to his order.

But she was engaged in “kale pwa” with the neighbouring vendor, upon which my teacher, her customer told her, “kanpe la, pa kale pwa, kale pwa (stop here, don’t shell peas ie gossip, shell peas.” 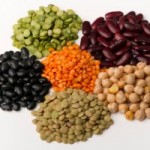 It was a good story and made me ever more curious about Haiti’s fresh red beans. Being proud (but hopefully not flatulent) Bean Eaters, we went looking for them on Saturday.

Without success at the mache peyzan, the farmers’ market practically outside our front gate.

As we travelled up to Petionville, I looked in vain for pwa wouj vet at the street vendors.

When I found them at the supermarket, they were expensive (121 gourdes or $3 for a small bag that cooks a curry just enough for four people). Compare that to a $3-bag of dried beans, which is good for many many meals. But the pwa wouj vet were admittedly rather pretty, faintly flushed pink. 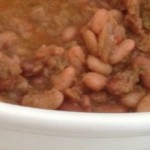 And they took bean curry to a whole new level. Creamy. Flavourful. Sublime. The king of beans.

We’re hooked. Now for the pwa blanc vet. A cassoulet made out of fresh white beans would be a thing of beauty.