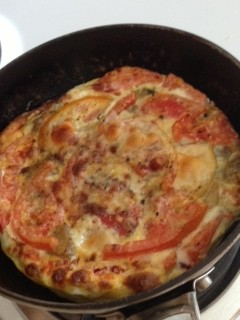 The #shutdown (and possible economic woes of many Americans) and the frittata on the right is reason enough to salute these three developments in the food world:

Leftover swap, a new free app that lets diners trade or give away their excess food by taking photos of what’s on offer and uploading them to the database.

Rub & Stub, the new restaurant in Copenhagen that only serves food prepared with ingredients discarded by grocery stores and other retailers.

First to the frittata. It was my weekend clear-the-fridge ‘creation’, though that may be too grand a word for such humble fare. It contained (in exactly this order) the following:

I started gently on the stove top, then whacked it into the oven and finished up under a hot grill. The result was a more-ish, nutritious meal without waste.

It’s much the same idea that informs The Daily Table. Doug Rauch, the former president of the Trader Joe’s supermarket chain, decided to deal with Americans’ propensity to junk food for fear it had gone bad.

And then there’s Leftover Swap, which launched a month ago, as America’s first attempt to link up leftover takers and givers and all those who “care about reducing waste, eating locally, and building relationships within the community”.

According to a recent study of date labels by the Natural Resources Defense Council and the Harvard Food Law and Policy Clinic, there’s a a staggering amount of waste in the US because of the confusion about use-by dates. So, America throws away 40 per cent of the food it produces every year. That’s $165 billion dollars’ worth of nosh.

Clearly, the US needs hundreds and hundreds of Rub & Stub,(which roughly translates to “lock, stock, and barrel”). The restaurant uses ingredients that grocery stores would likely toss to create a moveable feast. It reduces waste and plans to donate profits to charities in Sierra Leone.

You don’t have to be a freegan (someone who’s prepared to eat discarded edible food to reduce waste) to incorporate some of these ideas into your life. Great concepts can produce great takeaways, as the popular idiom goes. And help weather #shutdown, furlough or anything else.