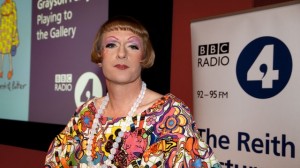 Today, Grayson Perry will deliver the second of his Reith Lectures for BBC Radio 4 and he will, in the series’ eponymous title, be ‘playing to the gallery’.

But he’s eminently worth listening to.

Mr Perry, a cross-dressing potter who often gads about as ‘Claire’ in bright dresses, ‘flatforms’, hairbands, bows, and with eyeshadow and lipstick, is one of the luminaries of the art world but not given to humbug. He won the Turner Prize in 2003 and admits that each his pots now sell for a minimum of £100,000. But he also regards himself as outside the Establishment, ie the ‘mafia’ that is made up of the more conventional figures of the art world. I’m at the “coalface” of the cultural world, or perhaps even the “call centre”, he joked.

In the first Reith Lecture last week, he teased and explored the idea that ‘Democracy has bad taste’, how the art world recoils from popularity, and who decides if a piece of art is good or not. The people, he seems to be saying, would never really be allowed by the art aristocracy to create successes; they would be deemed too uninformed.

One of the more engaging parts of the lecture was his critique of arty language and what he called ‘International Art English’. It is, he said, a rebuke to ordinary English for its lack of nouns; it cloaks art in an impenetrable prose so solid and so serious as to seem like an entirely different, enclosed world.

And then he discusses the “validation” of art works – by curators, agents and so on – and the curious way in which an artist is suddenly deemed successful, desirable, buy-able.

One has to salute the BBC for inviting Mr Perry to deliver a series (named after its first director-general Lord Reith) featuring a leading thinker every year. The lectures began in 1948 with a philosopher and Nobel Laureate and have now encompassed a transvestite potter and conceptual artist. From Bertrand Russell to Grayson Perry. That’s the beauty of the BBC. It is the Establishment, except when it isn’t. And that’s Grayson Perry. Self-confessedly conservative with a small ‘c’, except when he isn’t.