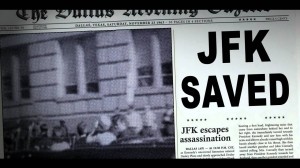 Today, the 50th anniversary of JFK’s assassination, it’s Camelot mania all over again. As if it ever ended. But in this season of remembering, there is everything to aid memory, stimulate it or newly create it. There are books, movies, special cellophane-wrapped editions of the main Dallas paper from that grim day November 22 1963, commemorative magazine issues, iPhone and iPad apps.

But to my mind, it’s Stephen King’s novel ‘11.22.63’, published a couple of years ago and unrelated to the current mania, that says the most about what happened that day.  Sometimes, it’s best to accept the “obdurate past” for what it is.

Mr King writes about the build-up to the assassination and an attempt to prevent it, using time travel as an ingenious device. But changing the past does not guarantee a golden future.

For instance, when school teacher Jake Epping is able to time travel back to 1958 and substantially alter a murderous attack on a family (which left one of its sons, the school janitor Epping knew in 2011, permanently disabled and brain damaged), it does not really change the man’s life for the better. Epping finds out on returning to 2011 (after making that change to the janitor’s past) that the janitor is not the janitor at all, and in fact, is not even alive. Though he has been spared the brain damage he’d sustained in the original timeline, he was drafted into the military and killed during the Vietnam War.

So too with preventing the assassination of President Kennedy. When Epping returns to 2011 having done so, he finds the US ravaged by atomic holocaust and frequent natural disasters, the Civil Rights Act of 1964 has not been passed, the Vietnam conflict had escalated into a nuclear war that precipitated numerous other atomic conflicts around the globe, Maine had seceded and become a Canadian province and massive earthquakes had sunk several Japanese islands. As Mr King says, “Not good to fool with Father Time”. Even if it means reversing a tragic event that changed the world.