BlackBerry achieves relic status but are the rumours greatly exaggerated? 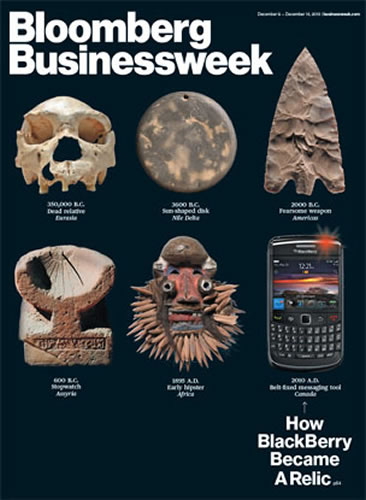 The US government is saving Blackberry from becoming a “relic”. That’s a dangerous word and it’s on the cover (see right) of Bloomberg Businessweek magazine this month. Just below a photograph of a BlackBerry handheld. The smart phone that’s not considered so smart any more. (Except by the US federal government, which remains BlackBerry’s biggest customer even as the rest of the world buys iPhones and Samsung Galaxys.)

Bloomberg Businessweek drove home BlackBerry’s increasing irrelevance by featuring the phone along with some other objects from the distant past  – a flint arrowhead; a human skull and suchlike. The comparison is obviously rather extreme but it’s a smart, snappy way to say a great deal.

Which is to say that BlackBerry has gone from being the world’s most valuable tech company and, as the magazine puts it, “the indispensable accessory of business executives, heads of state, and Hollywood celebrities” to a crushed unwanted creature from the days before iPhones and Android devices.

This is why, Friday, December 20, was probably one of the worst Christmas countdowns ever for BlackBerry. Its interim chief executive John Chen announced that the company would no longer make phones, but offer cyber-security strategies to businesses (the sort of thing that the US government would approve of).

Everyone read BlackBerry’s share price (on Nov 21, just above $6, the lowest in almost 15 years), Mr Chen’s strategy, Bloomberg Businessweek’s cover and the general disinclination to buy a BlackBerry as clear pathognomonic signs of death. Or impending death.

But then one has to remember all the clever clogs who wrote, back in 2007, that Microsoft  was dead. And here it is, alive and well and with Xbox as a crucial device in consumers’ living rooms. The consoles do much more than play video games, as Alan Shimel pointed out in Network World at the start of the year. They allow Microsoft to control people’s home-shopping, an enormous opportunity.

Microsoft may no longer be a frightening company, like Google. So too BlackBerry. But rumours of its relic status may be greatly exaggerated.