A year in many words. Why Bitcoin and not the self-help Bristol pound? 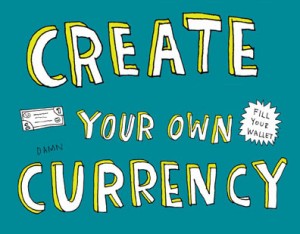 The Financial Times chose Bitcoin as one of the words of the year. Some of the others in the series were twerking, red line and privacy. So far, so predictable. But why Bitcoin? It could be argued that it is not as valuable a unit of exchange, or as remarkable a concept as the Bristol pound.

So, what was the FT’s argument? Bitcoin, it explained, “appeals to speculators for its frothy price and to libertarians for what it seems to stand against (because) it is not controlled by large corporations (or) issued by a central bank.” Even so, it handsomely admitted that Bitcoin’s value appears to lie more in the ideals it embodies than as a useful as a medium of exchange .

That’s where the Bristol pound comes in. It’s a local currency, particular to the English city of Bristol but it has the potential to be a glocal concept.

Back in September, as this news item recounted, Bristol found that the currency it created in 2012 was taking off rather better than expected. More than 600 local companies had signed up, giving the Bristol pound a base amount of £200,000 and making it the UK’s largest alternative to Sterling.

The Bristol pound was meant to ensure that money earned in Bristol is spent at local businesses but unlike other UK local currencies, it could also be used to pay local business taxes, used online and had strong support from the local council.

Local currencies are an interesting, community-minded monetary unit, a micro-economic experiment that promotes loyalty and small businesses. They’ve existed for hundreds of years but became a particularly important monetary unit during the Great Depression.

Even so, most local currencies remain small and insignificant. Unlike the US and parts of Europe, the UK has traditionally had much less acceptance of alternative currencies. This is why the sudden English proliferation of local currencies is interesting. (The Totnes Pound was launched in Devon in 2006. Stroud, in Gloucestershire, did the same around the same time.)

And this is also why the Bristol pound’s apparent success tells the story of our times arguably much better than Bitcoin. It underlines the value of localism – how communities can find local, resilient methods to withstand an uncertain new economic world order.